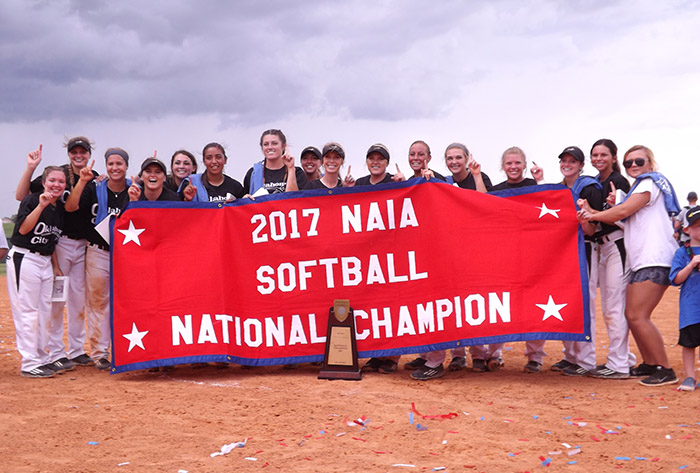 CLERMONT, Fla. - Oklahoma City University defeated Corban University, 4-1, to claim its second straight NAIA World Series title and the Association's record 10th in program history on Thursday at Legends Way Ballfields. During their run to back-to-back national championship, the Stars (68-1) are a combined 135-4, which included a NAIA-record 52-game win streak that spanned over two seasons.

For the Warriors (47-13), it marked the first time a Corban athletic program reach a champioship final.

Sophomore pitcher Georgia Wall garnered tournament most valuable player honors for the second straight year, becoming just the third two-time NAIA World Series MVP. She finished off 2017 with a 33-0 reocrd and is 61-1 in her young career. She posted a 0.25 ERA in 28 innings of work, breaking the previous mark held by the Stars in 2012 of 0.32.

The Stars' McRae Cayton, Laci Joyner and Jaci Smith snared all-tournament nods. In the first inning, Smith smacked a double, and Madison Ellis followed with a single. Cayton drove in OCU's first run with a base hit to left. Ellis crossed the plate on Joyner's bunt as the Stars jumped out to a 2-0 lead in the first.

In the fifth, Cayton hammered a leadoff triple and scored on Joyner's sacrifice fly to center. Ellis launched her 19th home run of the season, a leadoff shot over the left centerfield fence in the seventh.

The Warriors got on the board in the fifth on an RBI single by Sam Woodley. Jessie Isham and Raimee Sluder recorded two hits apiece for Corban.

-- Courtesy of OCU Athletics and NAIA