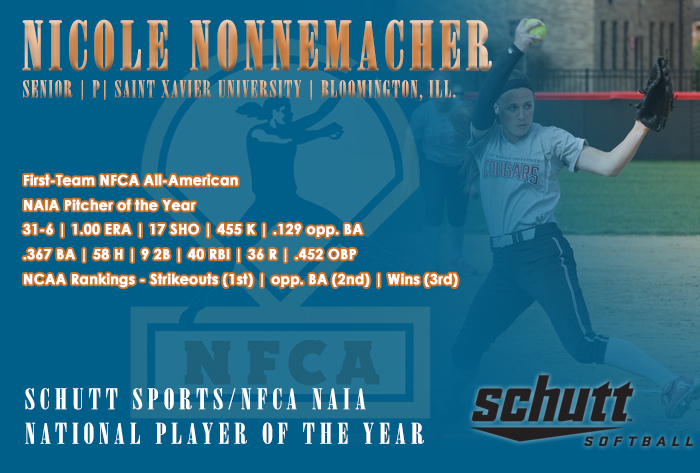 Nonnemacher, who led the NAIA with 455 strikeouts and ranked second overall in batting average against (.129), played an integral part in the national runner-up finish for the Cougars. The three-time NAIA Pitcher of the Year earned her second straight first-team All-American selection and third recognition overall. She finished 2016 with a 31-6 record, 1.00 ERA and 17 shutouts in 266.1 innings of work.

Selected the 2016 Chicagoland Collegiate Athletic Conference (CCAC) Pitcher of the Year and to the NAIA World Series All-Tournament team, Nonnemacher also provided some offensive punch at the plate. She hit .367 with 58 hits, nine double, three triples, 40 RBI and 36 runs scored with a a team-best .452 on-base percentage.

Her efforts in the circle and at the plate helped Saint Xavier complete its most successful season in program history. Along with national runner-up status, the best postseason finish ever, the Cougars posted a 46-10-1 overall record and won the CCAC regular season title with a 20-2-1 league mark.

The award was voted on by the members of the NFCA’s NAIA All-American and Coaching Staff of the Committee.