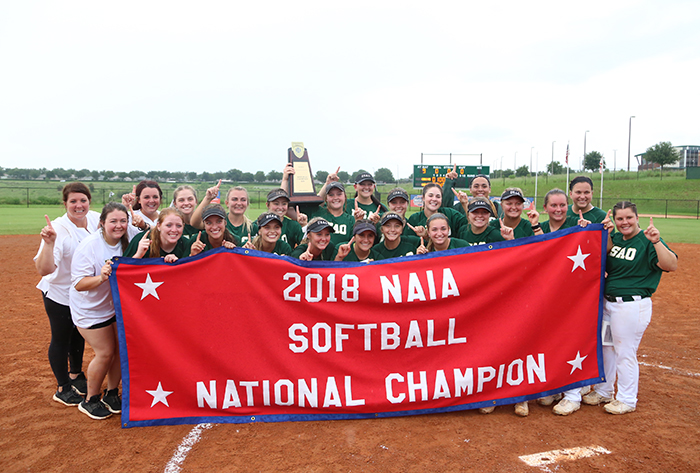 In the bottom of the third, Science & Arts scored four unearned runs with two outs, highlighted by Shania Beck’s ninth home run of the season, a three-run shot to left. Beck finished the day 2-for-2 with a run, three RBI, and a walk.

Emily Cerny was named Softball World Series Most Valuable Player, throwing a complete game and giving up just one run on five hits with four strikeouts. At the plate, she was 2-for-2. Cerny pitched all 30 innings this week, holding opponents to a .193 batting average, striking out 27 and posting a 1.17 ERA.

Rachel Sullivan led the way for Columbia with a 3-for-4 effort and an RBI. Her RBI single gave the Cougars a 1-0 lead in the third. After the Cougars scored in the top of the second, Cerny allowed just three base runners between the third and seventh innings.

Sullivan finished the week, posting a .409 average with nine hits. Molly Carter took the loss, despite not allowing an earned run in 2.2 innings of work.

“We’ve preached win every pitch of every inning all year long and they did that. Going into postseason, I didn’t think we had peaked yet. I think that’s what it takes to have a national championship team is to peak at the right time. My hitters came through when we needed it and our seniors got the job done.”

“She’s a true competitor. I compare her to a bulldog because she never stops, and that’s what makes her so great.”

On the four-run third inning:

“We needed the momentum. Columbia is a great ball team and focuses on momentum and thrive off it and I knew we had to do that as well.”