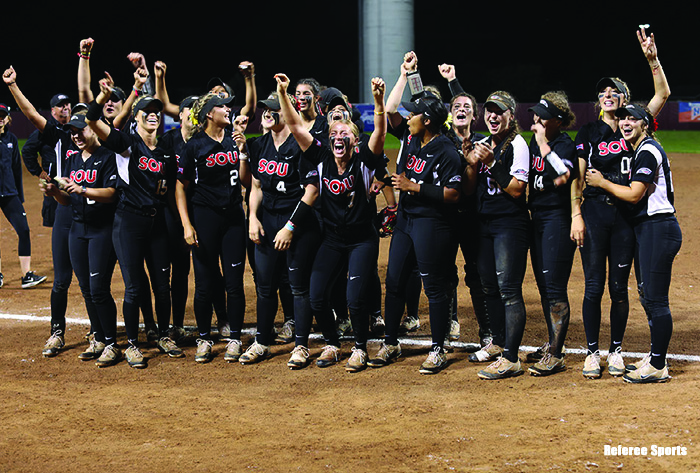 SPRINGFIELD, Mo. – Southern Oregon didn’t let an eight-hour storm delay rain on their championship parade as the Raiders (52-8) claimed the 2019 NAIA Softball World Series National Championship Thursday night with an 8-3 victory over 10-time champion Oklahoma City. After the Stars (61-8) forced a winner-take-all title game with an 8-4 win, the Raiders bounced back to capture the program's first World Series championship.

Southern Oregon led 6-3 after four innings, but the game was held up for eight hours because of a steady downpour. When play resumed the Raiders tacked on two more runs and Gabby Sandoval shut down OCU's offense over the last three innings on just two hits. For the game she struck out five and finished the season 36-3.

Paige Leeper smashed a line drive grand slam to put the Raiders up 4-0 in the bottom of the first. Oklahoma City cut the lead in half in the top of the second. An RBI grounder by tournament MVP Lauren Quirke made it 5-2 in the bottom half of the second, but the Stars answered quickly on Brittany Perez's RBI double. A run-scoring single by Tayler Walker pushed the Raiders' advantage back to 6-3 before the game was halted.

A four-run fourth keyed OCU's 8-4 victory in the first game of the day. Jaci Smith led the Stars with three doubles and two RBI and finished her senior campaign with NAIA single-season records with 119 RBI and 114 runs scored.