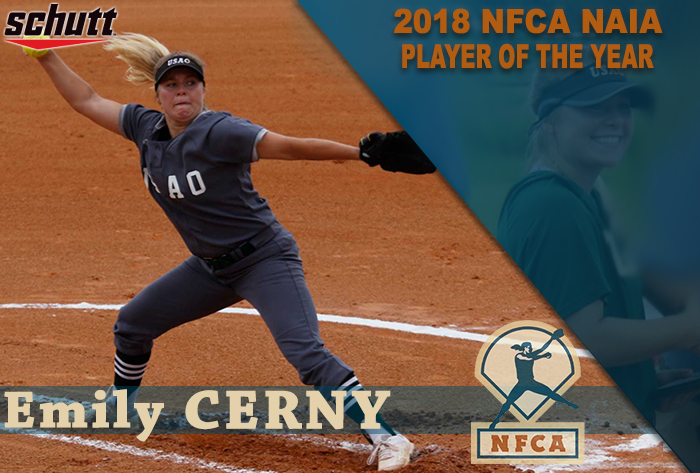 LOUISVILLE, Ky. – University of Science and Arts of Oklahoma’s Emily Cerny has been named the 2018 Schutt Sports/NFCA NAIA National Player of the Year, announced the Association on Friday afternoon.

Cerny played a pivotal role in the Drovers winning their first NAIA World Series title. The rookie hurler led the NAIA with 33 wins and ranked third in opponent’s batting average (.164), strikeouts (298), and was seventh in ERA (1.15). The Newcastle, Okla. native finished the season with a 33-4 record and 12 shutouts, both program records.

Cerny was named the World Series MVP after leading the Drovers to the title. She pitched all 30 innings, posting a 1.17 ERA with 27 strikeouts and holding her opposition to a .193 batting average. She also garnered NAIA and Sooner Athletic Conference Pitcher of the Year honors.

The award was voted on by the members of the NFCA’s NAIA All-American and Coaching Staff of the Committee. Cerny is the third recipient of this prestigious award, joining last year’s winner Kaisey Carson of Indiana Wesleyan and inaugural player of the year Nicole Nonemacher of Saint Xavier.