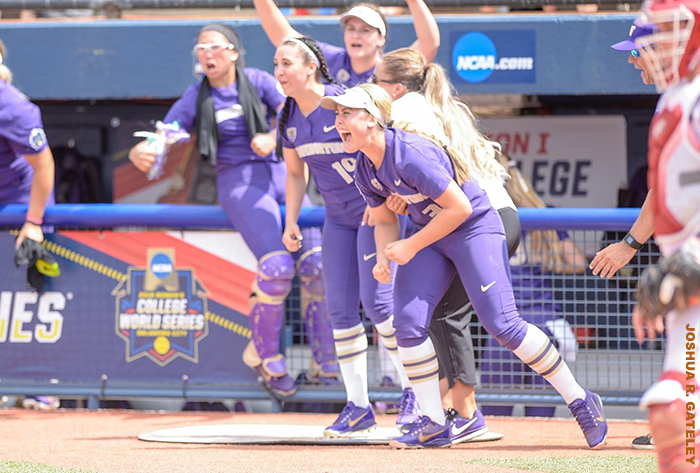 OKLAHOMA CITY -  No. 1 Oregon, No. 2 Florida, No. 3 UCLA and No. 5 Washington opened the 2018 Women's College World Series with victories, Thursday at OGE Energy Field. The first session, which featured the Ducks and Huskies set a session one attendance record with 8,561 spectators.

Oregon and Washington will meet tomorrow, June 1 at 7 p.m. ET, followed the Gators and Bruins at 9:30 p.m. ET. The four squads that dropped contests on Thursday return to action on Saturday. No. 8 Arizona State matches up with No. 4 Oklahoma at noon ET and No. 7 Georgia clashes with No. 6 Florida State at 2:30 p.m. ET.

Oregon defeated Arizona State, 11-6, in what was expected to be a low-scoring affair with two NFCA All-America pitchers starting in the circle. However, the fireworks started early and continued throughout game one of the 2018 Women's College World Series, Thursday afternoon at OGE Energy Field.

The top-ranked Ducks (53-8) recorded 14 hits, one shy of their season best, and scored the most runs in a WCWS game in their program’s history.

Starting pitchers Miranda Elish of Oregon and Giselle Juarez of Arizona came into the game with sub 1.00 ERAs and were each were tagged for two runs in the first inning. Juarez went the distance allowing a season high in runs and hits, while Elish matched a season-high with five runs allowed over five innings of work.

Each team scored a pair of runs in the first inning. Arizona State’s DeNae Chatman launched a two-out home run to left centerfield to give the Sun Devils an early advantage. However, that lead did not last long. Three straight bunts, an error and a two-run single by Gwen Svekis just over the drawn-in shortstop evened the score at 2-2.

The Ducks broke the 2-2 deadlock with three runs in the bottom of the third. Shannon Rhodes chopped a RBI single through the five-six hole to make in 3-2. The next batter Lauren Burke roped a two-run triple into the rightfield corner.

Two singles, combined with two errors pushed Oregon’s lead to 6-2 in the fourth.

Arizona State made it a one-run game in the top of the fifth on a two-out, three-run bomb to right centerfield by Morgan Howe. Oregon countered in the bottom half of the frame with a two-run home run by Haley Cruse, her second long ball of the season.

The Ducks added three insurance runs in the bottom of the sixth thanks to Shannon Rhodes’ three-run blast to centerfield.

The Sun Devils scored one and threatened for more by Megan Kleist closed out her two-inning save with back-to-back strikeouts.

Washington’s Gabby Plain and Taran Alvelo combined to shut out Oklahoma as the Huskies (50-8) edged the Sooners (55-4) in game two of the 2018 Women’s College World Series.

With a stellar defense behind them, the du held a red-hot Sooner offense to six singles and did not allow a runner past second. The rookie Plain (21-4) struck out one, allowed four hits and did not walk a batter in 5.2 innings of work. Alvelo picked up her third save of the season recording the final four outs, two via a strikeout.

Washington struck for the game’s only two runs in the top of the fifth. After OU starter Paige Parker was lifted following a leadoff walk, the Huskies dropped down a bunt single and sac bunt off hard-throwing reliever Paige Lowary, putting runners at second and third. UW’s Sis Bates hit a slow chopper halfway between the plate and the circle. Lowary’s toss home was wide allowing Trysten Melhart to slide home safely. Julia DePonte deposited the next pitch into center for a RBI single and a 2-0 Husky lead.

The Huskies threatened again in the sixth, loading the bases with no outs. Parker reentered and got out of the jam.

OU put some pressure on Washington with two out rallies in the bottom of the sixth and seventh innings. In the sixth, Sydney Romero reached on an infield single and Jocelyn Alo ripped one through the left side. The Huskies went to Alvelo and she was benefitted by a tremendous diving catch near the rightfield line by Melhart to end the threat.

Again, after the first two outs were recorded in the seventh, a pair of infield singles by Nicole Mendes and Caleigh Clifton brought the winning run to the plate in pinch hitter Kylie Lundberg. Alvelo regrouped and fanned Lundberg to end the game and earn the save.

Defensive was on display, especially by Bates at shortstop. The first-team NFCA All-American flashed the leather and showed off her arm all game, making play-after-play, while Melhart’s catch in right saved the day for the Huskies.

Eight different Huskies recorded a hit, seven of which were singles.

Parker (29-3) suffered just her third defeat of the season in six innings of work. She surrendered just a run on three hits with six strikeouts and one walk. Lowary gave up five hits and fanned two in one inning of work.

Florida cruised to an 11-3 five-inning run-rule win over Georgia. Aleshia Ocasio, Jordan Roberts and Hannah Adams homered for the Gators (56-9), who erased an early 2-0 deficit with five in the first and never looked back.

Ocasio (23-7) also picked up the win in the circle. She struck out seven, scattered seven hits and walked one. Adams was 2-for-3 with a home run and RBI, while Janell Wheaton, Jordan Matthews and Roberst knocked in two runs apiece.

Alyssa DiCarlo was 3-for-3 with a home run and RBI for the Bulldogs (48-12). Mary Wilson Avant took the loss as four UGA pitchers saw action. The quartet combined to allow seven hits, strike out three, walk eight and hit two batters.

Justice Milz’s opposite field two-run homer in the top of the first gave Georgia a 2-0 lead. The lead was short-lived as Florida responded in a big way with five runs, highlighted by a towering three-run blast to rightfield by Aleshia Ocasio that made it 5-2. The Gators previously tied it on Jordan Matthews’ two-run double to left.

After the Gators increased their lead to 6-2, the Bulldog got one back on a solo home run by DiCarlo in the top of the third.

The Gators closed it out with three runs in the fifth, the first coming off of the bat of Hannah Adams, who homered to leftfield. The other two runs came on a bases loaded walk and hit-by-pitch.

Kylee Perez hit a go-ahead three-run home run in the six-run bottom of the sixth to lift UCLA over Florida State, 7-4, in the final game of day one.

Trailing 4-1, Perez’s home run highlighted the Bruins’ explosion in the sixth that put them in the lead for good. After a bases loaded sac fly by Julie Rodriguez cut the deficit to 4-2, Perez crushed a Kylee Hanson offering into the rightfield bleachers. A RBI triple by Aaliyah Jordon and a two-out throwing error capped off the frame.

Perez finished 3-for-4 with home run and three RBI. Sister Briana Perez was 2-for-3 with a RBI and run scored. Rachel Garcia went the distance to pick up her 28th victory of the season. She fanned 15, while allowing four runs on four hits with six walks.

The Seminoles broke a scoreless deadlock with four runs in the top of the fifth. With a runner on third, Dani Morgan laced a RBI single to center, which was the Seminoles’ first hit off Garcia. FSU proceeded to load the bases and Sydney Sherrill delivered a bases-clearing double that dropped just inside the leftfield line for a 4-0 lead.

UCLA got one run back in the bottom half of the fifth on a run-scoring single by Briana Perez.

Hanson (28-6) suffered the loss in an inning-plus of relief. She allowed six runs, five earned, on five hits with a walk and a strikeout. Starter Meghan King went the first 4.2 innings, surrendering an unearned run on five hits. She struck out six and issued one free pass.