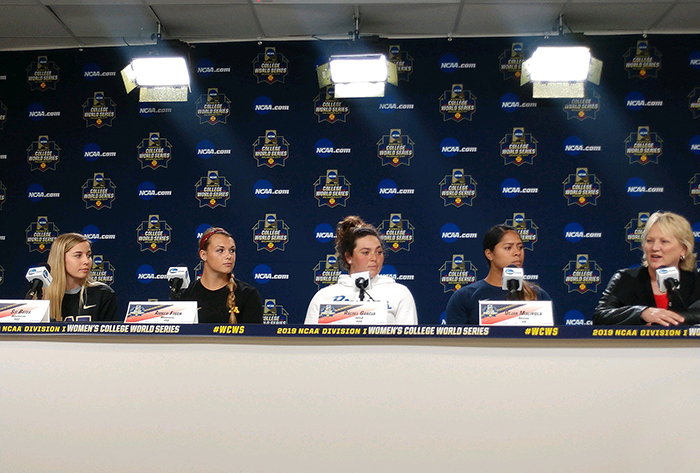 OKLAHOMA CITY – Fifty-four student-athletes from 29 different institutions were selected to one of three 2019 NFCA Division I All-America teams, the Association announced on Wednesday afternoon during its annual press conference at the Women’s College World Series. Additionally, the NFCA announced its annual Diamond Sports/NFCA Catcher of the Year and New Balance/NFCA Golden Shoe award winners.

The Southeastern Conference led the way with 15 honorees. The Pac-12 Conference had 13 representatives, while the Big 12 earned 10 plaudits. The Big Ten (5), Atlantic Coast Conference (3) and Colonial Athletic Association (3) also had multiple recognitions.

This year’s teams are highlighted by a pair of four-time NFCA All-Americans. Joining the elite list is first-team outfield selection Amanda Lorenz from the University of Florida, who was voted in as the 35th four-time honoree, and third-team at-large pitcher Megan Good of James Madison University as the 36th.

Lorenz, a top-10 finalist for USA Softball Collegiate Player of the Year, is making her third consecutive appearance on the first team after a third-team nod as a freshman in 2016. Lorenz ranks sixth in on-base percentage at .564 and fourth with 62 free passes. For her career, Lorenz has drawn 236 walks and owns a .550 on-base percentage. She enters the WCWS batting .419 with 13 doubles, four triples and 11 round trippers to go along with 41 RBI, 57 runs scored and a .721 slugging percentage.

Garcia, a three-time NFCA All-American, captured her second straight unanimous first-team honor at Utility-Pitcher. The Pac-12 Player and Pitcher of the Year leads the Bruins pitching staff with a 24-1 record, 1.01 ERA and 253 strikeouts in 166 innings of work. Offensively, she has contributed with a .344 batting average, nine doubles, nine home runs, 49 RBI and a .443 on-base percentage. The junior owns the third lowest ERA in Division I, while ranking seventh in hits allowed per seven innings and 15thin strikeouts.

We go around the horn with our next four unanimous selections in first baseman Konwent, second baseman Clifton, third baseman Cheek and shortstop Bates. Konwent and Cheek are earned their first NFCA All-America accolades.

Konwent, a junior, was named Big Ten Player of the Year, a first in Badger softball history. She set single-season program records with 15 home runs and 146 total bases. The top-10 finalist for USA Softball Collegiate Player of the Year ranks fourth nationally with a .582 on-base percentage, fifth with a .459 batting average and 21 doubles. Additionally, Konwent had 53 RBI, scored 40 runs and walked 42 times.

Clifton ranks third nationally in slugging at .919, fourth with 1.2 runs scored per game and sixth with a .564 on-base percentage. A first-team All-Big 12 selection, Clifton is having a career senior season, hitting .419 with 11 doubles, six triples and 17 home runs. She has driven in 49 runs and scored a team-high 67 times. The Big 12 Defensive Player of the Year has committed just two errors and is fielding at a .980 clip.

Cheek, a senior, ranks third nationally with a .610 on-base percentage and 64 walks, along with the fourth-best slugging percentage at .926. The Southeastern Conference (SEC) Player of the Year and top-10 finalist for USA Softball Collegiate Player of the Year hit .436 with 13 doubles, 20 long balls, 53 RBI and posted an OPS of 1.536.

Bates is back for a second straight season as the first-team shortstop. She repeated as the Pac-12's Defensive Player of the Year, making just two miscues and posting a .980 fielding percentage. The junior leads Washington with a .386 average, 71 hits, 59 runs scored and a .465 on-base percentage. An All-Pac 12 first teamer, Bates doubled 11 times, recorded three triples and a posted a .478 slugging percentage.

Rounding out the unanimous selections is outfielder Palomino-Cardoza. The two-time NFCA All-American has started all 59 games for the Wildcats, batting .394 with a team-best 74 hits and 18 doubles. A top-26 candidate for USA Softball Collegiate Player of the Year, she is hitting .394 with 17 homers, 64 RBI, 58 runs scored and a .782 slugging percentage. Roaming the outfield, she is perfect defensively in 68 chances.

Juarez captured her second straight first-team honor. The Big 12 Pitcher of the Year ranks second in the NCAA in hits allowed per seven innings, fourth in strikeouts per seven innings, sixth in ERA and eighth in total strikeouts. Juarez has put together an impressive 26-1 record with a 1.10 ERA, while striking out 229 and issuing just 31 walks. A top 10 finalist for USA Softball Collegiate Player of the Year, Juarez has recorded six shutouts and has held her opponents to a miniscule .132 batting average in 153.1 innings of work. She is the second OU pitcher to twirl two perfect games in a season.

Fiser picks up her first All-America honor during a stellar junior campaign. The hard-throwing righty is the catalyst behind the Gophers’ first-ever WCWS appearance. The unanimous Big Ten Pitcher of the Year is 31-7 with a league-best 1.17 ERA and 339 strikeouts, while holding her opposition to a .167 batting average and allowing just seven home runs. The top 26 finalist for USA Softball Collegiate Player of the Year ranks fifth nationally in strikeouts, 11thin strikeouts per seven innings and 12thin ERA.

Plain returned to the All-America squad for the second straight season after a third-team nod in 2018. Plain is a remarkable 23-2 with a 1.14 ERA, notching 229 strikeouts to just 37 walks in 172.2 innings of work. The USA Softball Top-26 Collegiate Player of the Year finalist has recorded a Pac-12-best 12 shutouts and four saves, while holding her opposition to a .146 batting average. Plain is ranked sixth nationally in shutouts and 10thin ERA, while tossing three no-hitters.

Cait Brooks from Notre Dame captured the first-team NFCA All-America honor in the Designated Player or Utility-Non-Pitcher category. The ACC Player of the Year is taking home her first All-America honor as a senior. She was one of the top sluggers in Division I, ranking 11thand 12thnationally with 20 home runs and an .873 slugging percentage, respectively. She hit .420 with eight doubles and also led the Irish with 56 RBI, a .516 on-base percentage and an OPS of 1.389.

The first at-large selection is Newman, who is making her second straight All-America team. In the circle, she was the NCAA Division I leader with 423 strikeouts. She also fanned batters at a Division I-best 13.4 per seven innings clip. The Missouri Valley Conference Pitcher of the Year set a NCAA Division I record with five perfect games. Newman, a top-10 finalist for USA Softball Collegiate Player of the Year, surrendered an NCAA-best 2.68 hits per seven innings over 221.2 innings, while holding her opposition to a minute .114 batting average and registering the NCAA’s fifth-lowest ERA at 1.07.

The second at-large selection was Sherrill, who made made her second straight All-America team. She topped on the Seminole squad with a .412 batting average, 75 hits, 18 doubles and 16 home runs and also led FSU with 60 runs, 60 RBI and a .775 slugging percentage. The ACC Defensive Player of the Year committed just seven errors in 194 chances at third base.

McQuillin took home her first NFCA All-America honor as an at-large pitcher. The senior southpaw recorded 10 shutouts, which is tied for 14thin the NCAA, along with a 1.52 ERA and 0.91 WHIP. McQuillin is 23-7 with 214 strikeouts and a .181 batting average against. The All-Pac-12 first-team selection played a key role in the Wildcats reaching the Women’s College World Series for the first time in 10 years.

Becker, an outfielder, took home her first NFCA All-America honor with this first-team selection. The senior started all 60 games for the Rebels, helping them to their second straight Super Regional appearance. Becker led the squad with a .428 batting average, 83 hits, 55 runs scored and a .488 on-base percentage. In addition to her stellar outfield play, the speedster is fourth in Division I with nine triples and has also swiped 34 bases.

Rounding out our first-team at-large honorees was Romero. Garnering her second NFCA All-America honor, the Sooner third baseman ranks sixth in the NCAA with a team-best 83 hits. The USA Softball Collegiate Player of the Year top-three finalist leads OU with a .435 batting average, 17 doubles, 19 home runs and 54 RBI. Romero, the Big 12 Player of the Year, has also scored 63 times and owns a .853 slugging percentage.

Jacquelyn Ramon, the New Balance/NFCA Golden Shoe Division I winner, leads the NCAA with 63 stolen bases, which is the 10thhighest single season total in Division I history and a Southland Conference record. She also led the league with a single-season SLU record 51 runs scored and her team-high .347 batting average was sixth in the Southland.