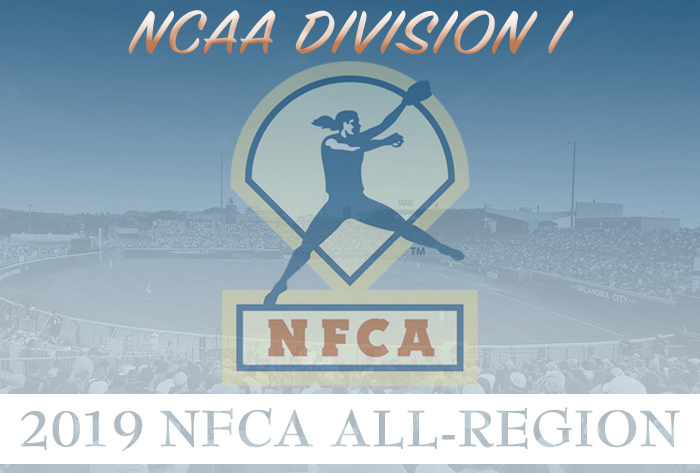 LOUISVILLE, Ky. – The National Fastpitch Coaches Association has announced that 392 student-athletes from 163 programs have received 2019 NFCA Division I All-Region accolades.

The awards honor softball student-athletes from the Association’s 10 regions with first, second and third-team selections. NFCA member coaches from each respective region voted on the teams, and all the honorees now become eligible for the 2019 NFCA Division I All-America squads.

Seven Sooners were recognized with first-team plaudits, while six Hokies and six Wildcats were named to the first team. The Huskies earned five first-team honors with four first teamers coming from LSU (South), the Dukes and the Seminoles.

Southern Illinois and Louisiana Tech topped the Mideast Region with five honors, while Ohio State led the Midwest with five as well. All three of those programs had three first teamers. UIC and the Wolverines each captured three first-team plaudits in the Great Lakes Region.

The Southeastern Conference paced all leagues with 40 honorees, while the Pac-12 and Big 10 were right on its heels with 38 and 37, respectively.

Conference players and pitchers of the year from member institutions are added to the third team if they were not already voted to an All-Region squad. In some instances, limited regional nominations prevent a position from being filled.

The 2019 NFCA Division I All-America teams will be announced at approximately 5 p.m. EDT on Wednesday, May 29, via NFCA.org.