Alabama Named 2012 Division I National Coaching Staff of the Year 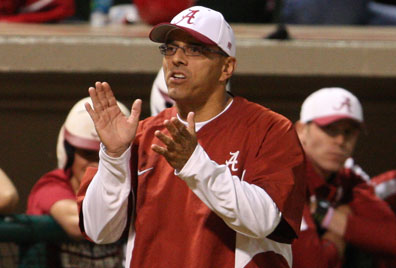 Alabama turned in a 23-5 record in the always tough SEC, capturing its third-consecutive regular season championship and first tournament title since 2010.

Hosting both the regional and super regional rounds in Tuscaloosa, the second-seeded Tide made good use of its home field advantage to go 5-0 over both rounds. Alabama tallied wins over UT Martin and South Alabama in the regionals and two over perennial-power Michigan in super regional play to advance to its eighth Women’s College World Series.

Once in Oklahoma City, the Tide topped conference rival Tennessee, defending champion Arizona State and top-seeded California to advance to the WCWS Championship Series for the first time in school history. Alabama dropped the first game of the series to Oklahoma, but won the next two games to bring home the national title to Tuscaloosa.

Helping lead the way for Alabama this season was 2012 Louisville Slugger NFCA First-Team All-American and WCWS Most Outstanding Player sophomore pitcher Jackie Traina. Traina ended her 2012 campaign with record of 42-3, a 1.87 ERA and 361 strikeouts.

Through 14 seasons with the Tide, Murphy has amassed a 744-198 record with a NCAA tournament appearance in each of 14 years, eight WCWS appearances, eight SEC West championships, five SEC tournament titles, four SEC regular-season titles and a national championship.

For their work this season, Murphy and staff also earned the South Region Coaching Staff of the Year award for the fifth consecutive season.

Oklahoma came within one game of a second national championship, advancing all the way to game three of the WCWS Championship Series. The Sooners used a 19-5 Big 12 record on the season to capture their ninth outright title. Oklahoma earned the No. 4 overall seed in this year’s NCAA tournament and turned in a 5-0 record through regional and super regional play. In fact, the Sooners did not lose a postseason contest until game two of the championship series against Alabama. In the deciding game, Oklahoma jumped out to an early 3-0 lead, but eventually fell, 5-4.

Louisville turned in one of the best seasons in program history by finishing the year with a 55-5 record. The Cardinals captured both the Big East regular-season and tournament titles and also went an impressive 27-2 at home. In its ninth consecutive NCAA appearance, Louisville earned the 15th overall seed and the right to host for only the third time in program history. Despite wins over Valparaiso and Kentucky in the regional, the Cardinals were eliminated in the regional final by Michigan.

Virginia Tech turned in an impressive post-season run that saw them finish just one win shy of advancing to the super regionals. Despite finishing tied for third in the ACC during the regular season, the Hokies made it all the way to the conference title game, eliminating top-seed North Carolina along the way. In regional action, Virginia Tech opened up with two wins to advance to the title game. However, in the final the Hokies ran up against a determined host team from Tennessee and fell twice.

South Florida made 2012 one for the record books, as it advanced to its first-ever WCWS. The Bulls finished fourth in the Big East during the regular season and suffered a disappointing first round exit from the league tournament. However, South Florida bounced back in the regionals going 3-0, including a win over host Florida in the title game. The Bulls were also able to bounce back from a game one loss to Hofstra in the super regionals to punch their first ticket to Oklahoma City. South Florida finished its season with a 0-2 performance at the WCWS.

Missouri finished its 2012 Big 12 campaign in second, just two games behind league champs Oklahoma. In the regionals, the Tigers got two wins over Illinois State and one over DePaul to earn their fifth straight region title. Missouri dropped its first super regional game against LSU, but was able to grind out a 5-1, 12-inning win in game two to force a deciding game. In game three, the Tigers jumped out to an early lead, but were not able to hold on, as LSU won, 3-1.

The 2012 season will go down as the most significant in Hofstra history to-date, as it saw the Pride come within one game of a trip to Oklahoma City. After starting the year at 2-11, Hofstra went 40-4 over its final 44 games, losing just twice from March 17 to May 25 and going undefeated in CAA play. After winning the CAA tournament, the Pride went 3-0 at the Los Angeles regional to earn the first super regional berth in program history. The Pride took the opener of the super regional against South Florida, 2-1 in 11 innings, but dropped the final two games, both also by the score of 2-1.

California spent the majority of the season ranked No. 1 in the nation and won its second ever Pac-10/Pac-12 title and its first since 1987. The Golden Bears earned the overall No. 1 seed in the NCAA tournament and hosted postseason play for the first time since 1993. After falling to Arkansas in the second game of the regional, California won its next five games to advance to its second-straight WCWS. In Oklahoma City, the Golden Bears went 2-2 and advanced to the national semifinals. California has now won the award for the Pacific Region in each of the last two seasons.

Tennessee returned to the WCWS in 2012 after a one-year absence. The Lady Vols spent the majority of the year ranked in the top ten and finished second in the SEC during the regular season. After a semi-final loss to Florida in the SEC tournament, the Lady Vols were shocked in their NCAA regional opener by Miami (OH). However, Tennessee proved why it is consistently one of the nation’s top programs by winning six of its next seven games to head back to Oklahoma City for the fifth time in program history. At the WCWS, the Lady Vols’ season came to a close with two very close losses to Alabama and Oregon.

Arizona State made its sixth trip in seven seasons to the WCWS after spending the entire 2012 season as one of the top 10 teams in the NFCA rankings. The Sun Devils finished second in the Pac-12 during the regular-season and earned an at-large bid to the NCAA tournament. Arizona State suffered losses to Syracuse and La.-Lafayette in the regional and super regional, respectively, but bounced back in each case to return to the WCWS for the sixth time in seven seasons. In Oklahoma City, the Sun Devils opened with a win over Pac-12 foe Oregon, but dropped two of the next three games to end the season. This marks the second straight season in which the staff at Arizona State has earned the award for the West Region.