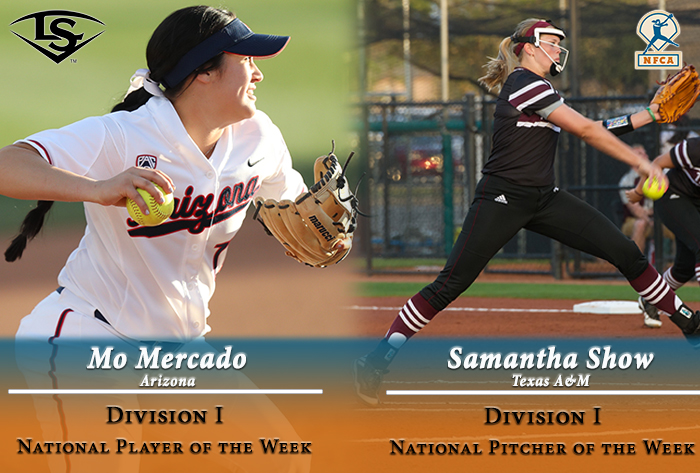 Mercado was a hard out last week in Cathedral City as she torched the competition with a .846 batting average (11-for-13), three doubles and home run, 11 RBI and six runs scored. She slugged 1.308 and reached base safely in 14 of 16 plate appearances (three walks) for an .875 on-base percentage. She launched the first grand slam of the season for the sixth-ranked Wildcats (15-1) and scored three times against Purdue, and recorded five multi-hit and four multi-RBI contests. Marcado, a native of Temecula, Calif., doubled and drove in two against then-No. 23 BYU and added three hits, two of which were doubles, three RBI and two runs versus LIU Brooklyn. The senior shortstopwas flawless in the field recording six putouts and five assists with no errors.

“This past weekend's performance at the Mary Nutter Classic was a very exciting weekend for the group that we have this year,” said Mercado. “From freshmen to seniors, we had multiple people step up and contribute in big moments. I am thankful and honored to receive the acknowledgements that I did from the NFCA. But overall, I am super excited and proud of the way our entire team performed as a whole, and I can't wait to see how we continue to multiply as the season continues.”

Show headlined a pitching staff that played a key role in the Aggies (15-0) going undefeated against a loaded field at the Mary Nutter and rising to No. 5 in this week’s USA Today / NFCA Division I Top 25 Coaches Poll. The sophomore righty picked up wins in her starts against No. 1 Florida State and then No. 23 BYU. Show, who was selected SEC Pitcher of the Week, began her weekend by stymieing the top-ranked Seminoles, matching a career-high with 15 strikeouts in a four-hit shutout. The East Bernard, Texas native followed with a two-hit, eight-strikeout performance against the Cougars. Additionally, she helped Texas A&M at the plate with a walk-off two-run double in the ninth inning against then-No. 21 Arizona State.

“I am so grateful to be named National Pitcher of the Week, but I couldn’t have done it without my teammates and coaches,” said Show We had a great weekend at the Mary Nutter, but we know there is a lot more to accomplish this season and I couldn’t be more excited to get back to work.”