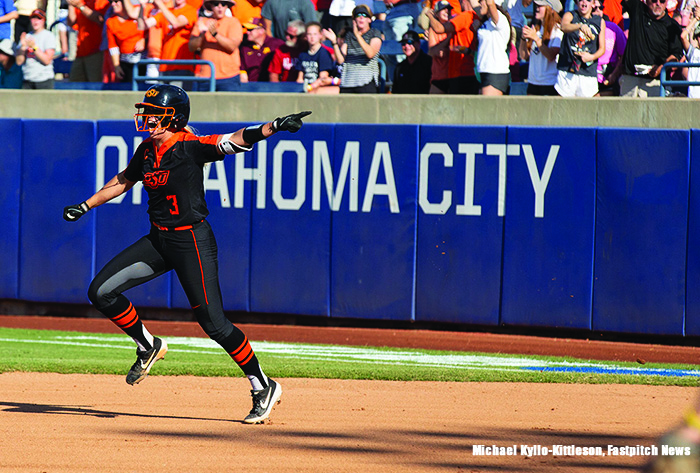 In the night session, the Cowgirls (45-15) and the Sooners (55-3) posted one-run wins over Florida and Alabama, respectively, setting up Bedlam in the winner’s bracket tomorrow night 9:30 p.m. ET. With those defeats, it marks the first time since 2008 the SEC did not win a game on day one of the WCWS.

Deja Mulipola launched a two-out, two-run homer in the top of the eighth lifting Arizona to a 3-1 victory over Washington in the opening game of the Women’s College World Series.

After two quick outs, Malia Martinez kept the inning alive for the Wildcats with a single to rightfield setting up the Diamond Sports / NFCA Division I Catcher of the Year’s game-winning shot to center. It was the junior’s  23rdlong ball of the season. Martinez was the lone Wildcat with two hits, stroking a double as well.

Taylor McQuillin (24-7) went the distance for Arizona. She scattered six hits, struck out seven and walked two. The senior southpaw worked out of several jams, stranding nine UW base runners and holding the Huskies hitless in eight at-bats with runners in scoring position.

After five scoreless innings, Arizona’s Jessie Harper and Washington’s Sami Reynold traded solo home runs in the sixth inning. Harper’s was her NCAA Division I-leading 29thof the season, while it was the fifth for Reynolds.

Taran Alvelo (25-5)  suffered the complete game loss in the circle for the Huskies. She fanned 11, walked one and allowed six hits. Taryn Atlee was 2-for-2  with a double for Washington.

UCLA jumped on WCWS newcomer Minnesota with three runs in the first three innings and went on for a 7-2 win in game two. After the Gophers cut the lead to 3-2 in the sixth, the Bruins answered with four in the bottom half to secure the victory.

UCLA’s Bubba Nickles led off the bottom of the first with a solo shot to left field. The Bruins would add a single run in the second on a bases loaded walk and another in the third courtesy of Taylor Pack’s sac fly.

Natalie DenHartog poked an RBI double over the leftfielder’s head to put the Gophers on the board with one out in the bottom of the sixth. Her two-bagger plated Maddie Houlihan, who led off the frame with a single. A top-three finalist for Schutt Sports/NFCA Division I Freshman of the Year, DenHartog came around to score on Allie Arneson’s two-out RBI single to cut the Minnesota deficit to 3-2.

UCLA answered Minnesota’s rally with four runs, all unearned, of its own in the bottom half of the sixth. The first run scored on an error by the second baseman and with two outs, Aaliyah Jordan’s three-run blast to leftfield bleachers pushed the Bruins’ advantage to 7-2.

Samantha Show hit two long balls and held Florida to one run as Oklahoma State edged Florida, 2-1, in game three. Show’s two mammoth blasts, the second in the top of the sixth, were the only two Cowgirl hits against Gator senior Kelly Barnhill.

Show (22-8), a NFCA Third-Team All-American, scattered six hits, struck out two and did not walk a batter leading OSU to its first WCWS victory since 1998. Barnhill (34-13) was the tough luck loser as the NFCA All-American second teamer fanned nine and walked one in a complete game effort.

Show connected on her first of the game with one out in the top of the first, sending Barnhill’s offering into the right centerfield bleachers. Gator Jordan Roberts answered with a solo blast of her own in the bottom of the second  to even the score at 1-1.

When Show stepped into the box in the sixth OSU had reached base just twice in its last 17 plate appearances. On a 1-0 pitch, she tattooed the game-winning home run to centerfield.

Amanda Lorenz and Roberts each had two hits for the Gators.

Nicole Mendez broke a 2-2 deadlock with a two-out RBI triple in the bottom of the sixth sending Oklahoma to a 3-2 win over Alabama in the final game on day one.

Mendez stepped to the plate with pinch runner Raegan Rogers on first and drove the game-winning triple off the fence in left centerfield.

Caleigh Clifton put the Sooners on the board in the first with a sac fly that was set up by back-to-back singles by Sydney Romer and Jocelyn Alo.

The Crimson Tide evened it up in the top of the third when Bailey Hemphill dropped an RBI single into no man’s land in right field. Alo put OU back on top in the bottom half of the frame, ripping a run-scoring single right back up the middle, scoring Romero, who tripled of the wall in right center.

Claire Jenkin evened the contest at 2-2 with a solo homer on a 0-2 count in the fifth. Jenkins finished 2-for-3 with two runs scored and an RBI.