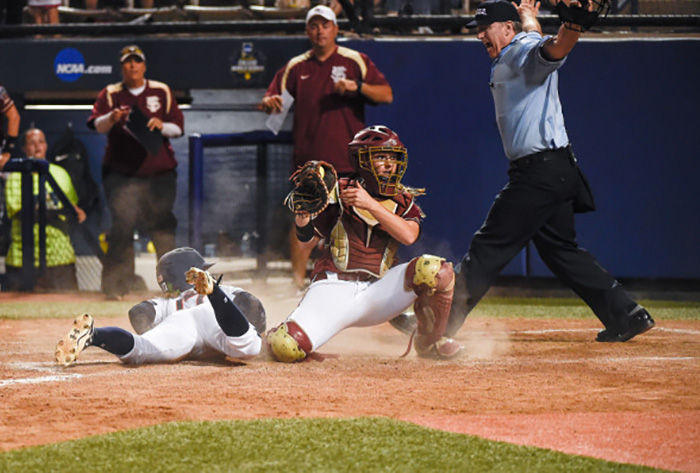 OKLAHOMA CITY – Auburn pinch runner Morgan Podany scored the game-winning run on a bang-bang play at home in the bottom of the eighth as the Tigers walked off with an 8-7 victory over Florida State and advanced to their first National Championship Series, Sunday evening at the Women’s College World Series.

Auburn, competing in just its second WCWS, won its program-record 57th game this evening and will play in the best-of-three Championship Series for the first time against Oklahoma. First game is scheduled for tomorrow, June 6 at 7:00 p.m. CT.

The contest was sent to extra innings thanks to Florida State (55-10) freshman Cali Harrod, who launched a game-tying three-run home run to rightfield with no outs in the top of the seventh.

After scoreless half innings by Auburn (7th) and FSU (8th), Madi Gipson led off with a single and made it all the way to third when the ball was misplayed in left. Podany, on a hard one hopper by Whitney Jordan to third, took off on contact and slid headfirst just under the tag of the catcher for the winning Tiger run.

Carlee Wallace and Jade Rhodes each hit go-ahead three-run home runs in the first and third innings, respectively, for the Tigers (57-10). Kaylee Carlson (19-2) started and finished to earn the win. She totaled three innings, allowed three runs, one earned, on four hits with five strikeouts and one walk.

Alex Powers gave FSU a 1-0 lead in the top of the first, sending a RBI double to the left centerfield fence, scoring Jessica Warren all the way from first base.

The lead did not last long as Wallace walloped a three-run home run to center in the bottom half of the first.

A two-out RBI triple by Morgan Klaevemann, immediately followed by a run-scoring bloop single off the bat of Warren tied the contest up at 3-3 in the top of the second. Both runs were unearned as an error to start the inning allowed Carsyn Gordon to reach and score on the triple. The Seminoles regained the lead an inning later on Gordon’s RBI single.

Once again, the Tigers responded with a three-run homer. In the third, Rhodes launched a mammoth long ball on the hill in the leftfield. An inning later, Kasey Cooper added another run when she left the yard in the fourth for 7-4 advantage.

The Seminoles threatened in the top of the sixth but could not score. With one out and runners on first and second, Klaevemann lined a ball that was headed to the left center gap but Auburn centerfielder Victoria Draper had other plans. Her highlight-reel full extension catch robbed Klaevemann from extra bases and save at least one run. FSU loaded the bases with two outs, but a fly out ended the threat.

FSU evened it in the top of the seventh on Harrod’s game-tying three-run bomb with no outs which set up the eighth-inning heroics.

The Seminoles recorded 11 hits on the evening with Powers and Gordon notching two apiece. Harrod finished 1-for-4 with three RBI and two runs scored.

Meghan King (25-5) suffered the defeat for Seminoles as she started and reentered in the sixth. The southpaw totaled four innings, allowed six runs, five earned, on five hits with a strikeout and three free passes.