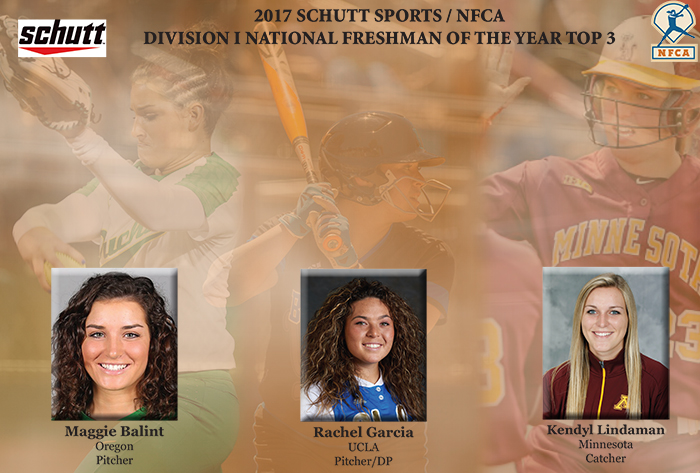 LOUISVILLE, Ky. – Oregon’s Maggie Balint, UCLA’s Rachel Garcia and Minnesota’s Kendyl Lindaman were revealed as the 2017 Schutt Sports / NFCA Division I National Freshman of the Year award’s top-3 finalists, announced the Association on Wednesday afternoon. The award will be presented to the winner prior to the 2017 NCAA Women’s College World Series in Oklahoma City, Okla.

When the recipient is announced on May 30 at the WCWS banquet, it will mark the first winner to hail from either the Pac-12 or the Big Ten Conference. Garcia and Lindaman are their program’s first top-3 finalist with Lindaman the first representing the Big Ten. Balint is the second Duck to make the final cut as current Oregon junior Jenna Lilly was a finalist in 2015.

Balint, who is a first team all-Pac 12 and second team NFCA All-Region selection, has been incredible in her first collegiate season in the circle for the Ducks. She is second in the Pac-12 and 10th in the NCAA with a 1.16 ERA and leads the league with a .166 opponent’s batting average. The West Grove, Pa. native posts a 21-3 overall mark with 150 strikeouts and three saves, all tops on the staff. Balint has been selected NFCA Pitcher of the Week, ESPNW Player of the Week and garnered two Pac-12 Pitcher of the Week honors and one league Player of the Week selection.

Garcia, the Pac-12 Freshman of the Year, is having a tremendous season both at the plate and in the circle. She put an exclamation point on her season by twirling her first collegiate no-hitter in the NCAA Regional opener, an 8-0 five-inning victory over Lehigh. A second-team NFCA All-Region and All-Pac-12 First Team selection, Garcia leads the Bruins with a 20-7 record, 1.84 ERA and 179 strikeouts in 167.2 innings of work. At the plate, she is fourth with a .333 average and third with 17 walks, adding six long balls, 26 RBI and 11 doubles. She has allowed zero or one earned run in 29 of her 40 appearances.

Lindaman put together a stellar rookie season for Minnesota in 2017. Named both the Big Ten Player and Freshman of the Year, she collected a record breaking eight Big Ten Freshman of the Week honors. Lindaman leads the Big Ten in home runs (20), slugging percentage (.899), RBI (tied-76), walks (63), on-base percentage (.598) and batting average (.426). She is also third in the NCAA in on base percentage, tied for third in RBI, fourth in slugging percentage and seventh in home runs.

Created in 2014, the award honors outstanding athletic achievement among Division I freshmen softball student-athletes. In the inaugural year, Auburn’s Kasey Cooper and Tennessee’s Annie Aldrete, were co-winners. Oklahoma’s Paige Parker took home the honor in 2015 and Florida’s Amanda Lorenz captured the award in 2016.