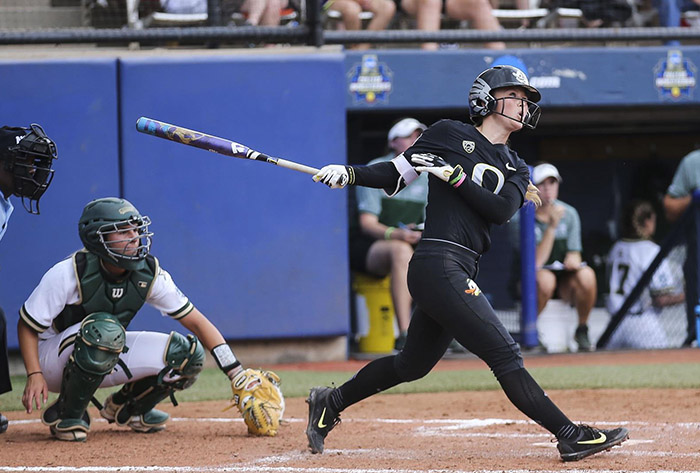 OKLAHOMA CITY -- In the first two elimnation games of the day, UCLA and Oregon staved off elimination with victories over Texas A&M and Baylor, respectively. The Bruins (48-14) will face Pac-12 foe Washington in the first game of the night session, followed by the Ducks (53-7) and LSU.

The winners of those contest will take on Florida and Oklahoma, respectively, in the semifinals tomorrow starting at noon ET.

UCLA jumped out on Texas A&M with three runs in the first two innings and closed the game out with five in the seventh to earn an 8-2 victory over the Aggies in the first elimination game of the WCWS.

NFCA All-American Riley Sartain provided the Aggies with their first run of the tournament with a solo long ball in the bottom of the third, cutting the deficit to 3-1.

The Bruins broke the game open with a five-run seventh, capped off by Rachel Garcia’s two-run round tripper, her eighth homer of the season. Spaulding, Perez and Brianna Tautalafua recorded RBI base knocks as well.

However, the highlight of the game came in the bottom of the seventh when Texas A&M pinch hitter Celena Massey homered in her final collegiate at-bat. It was Massey’s eighth plate appearance of the season and her first home run since her sophomore season when she hit four.

Garcia (23-8)  provided UCLA with another strong outing in the circle. The red-shirt freshman went the first six innings, allowing a run on three hits with two strikeouts and two walks.

Offensively, the Bruins pounded out 11 hits led by Perez and Tautalafua with three apiece. Perez homered, knocked in two and scored a pair of runs. Spaulding finished 2-for-4 with a double and three RBI. Garcia added two runs and two RBI.

Oregon raced out to a 5-0 lead and held off a Baylor rally for a 7-4 win in the second elimination game on day three of the WCWS.

With Oregon leading 7-4 heading into the bottom of the seventh, Baylor threatened by loading the bases with no outs on a walk and two singles off of relief pitcher Maggie Balint. Ducks head coach Mike White made the call for Megan Kleist to face the middle of the Baylor order, Ari Hawkins, Shelby Friudenberg and Shelby McGlaun, the latter two with 11 homers. Kleist slammed the door shut on the rally with a pair of strikeouts and a ball back to the box, earning her second save of the season.

The Ducks scored two runs apiece in the second and third innings, all coming with two outs. In the second, Lauren Lindvall scooted home with the game’s first run on a wild pitch. Lilly followed with a RBI double off the rightfield wall.

An inning later, Camuso laced a two-run double over the head of the leftfielder, extending the Ducks’ lead to 4-0.

Trailing 5-0 entering the fifth, Baylor plated four runs to get within 5-4. The Bears first two came on an error and a fielder’s choice. RBI singles by Kyla Walker and Friudenberg cut their deficit to one.

Camuso came up clutch a second time with a two-run double in the seventh that gave the Ducks two insurance runs, pushing their lead to 7-4.

Walker registered two of Baylor’s five hits with a run scored and RBI.