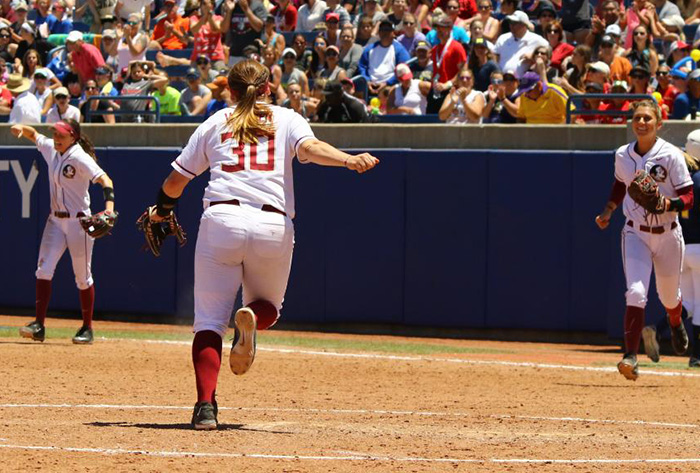 OKLAHOMA CITY – Jessica Burroughs twirled a three-hit shutout as eighth-seeded Florida State edged second-seeded Michigan, 1-0, in the first elimination game on Sunday and advanced to the semifinals of the Women’s College World Series at ASA Hall of Fame Stadium on Sunday afternoon.

Burroughs (29-5) did not run into too much trouble as she retired the side four times and only two Michigan base runners reached second base. She struck out six and walked two in her sixth shutout of the season. It marked the third shutout by the Seminoles at the WCWS, first since 2004, and it was only the third time Michigan was held scoreless this season.

Her counterpart in the circle, Megan Betsa (28-5), was almost unhittable, allowing just one hit, striking out four and walking four. She retired the side in four innings and sat down the final 10 batters she faced.

FSU’s Morgan Klaevemann scored the lone run of the game in the third. Standing on third with one out and bases loaded, the speedy centerfielder made the right decision on a wild pitch crossed the dish with what proved to be the winning run.

Klaevemann was just one of two players in the game to reach base safely twice, drawing two free passes off of Betsa. For Michigan it was Aidan Falk, who recorded a pair of singles to pace the Wolverine offense.

Alex Kosoff was the lone Seminole to record a hit, singling in the third inning.