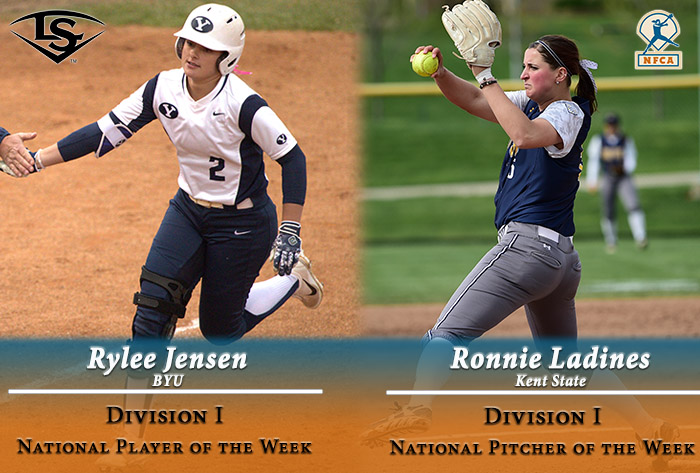 Jensen helped the Cougars to four wins last week, hitting .667 (8-for-12) with three long balls, 12 RBI and eight runs scored. She left the yard and scored three times in both ends of a doubleheader sweep of San Diego. In the opener, Jensen knocked in a career-high five runs, while tallying three more RBI in the nightcap. In a mid-week matchup with Utah Valley, the Idaho Falls, Idaho native homered and drove in three runs. Jensen also showed patience at the plate with five walks, which attributed to her .786 on-base percentage.

“Our coaches prepare us well for the pitchers we face, so we know what to expect before the pitch is thrown,” Jensen said. “We go up to the plate with a plan to execute our job and that’s what makes us successful as a team. We spend all week preparing so we are ready come game time. It’s a team effort! I’m honored to be a part of this team and it’s been fun seeing our hard work pay off."

Ladines was nearly perfect in her two starts last week at Buffalo, tossing a perfect game and a one-hit shutout. She retired 36 of the 37 batters, held her opposition to a .027 batting average and recorded 19 strikeouts in 12 innings of work. The Arlington, Wash. native fanned a career-high 15 and surrendered just one hit in a 1-0 series-opening victory. The following day, Ladines retired all 15 Bulls she faced with four strikeouts in a five-inning triumph. Additionally, she helped herself out with a three-run homer against UB, while earlier in the week, she launched a game-winning grand slam in the top of the seventh at Youngstown State.

“Receiving this award is a huge accomplishment that would not have been possible without the backing of my teammates,” said Ladines. “The defense made every play behind me and my catcher, Paige McCrary, did a great job calling pitches and caught two great games. The offense really helped me in the perfect game, taking away some of the pressure and ending it in five innings. It feels great to do my part to help the team sweep a series as we continue to move in the right direction as we get closer to the conference tournament.”