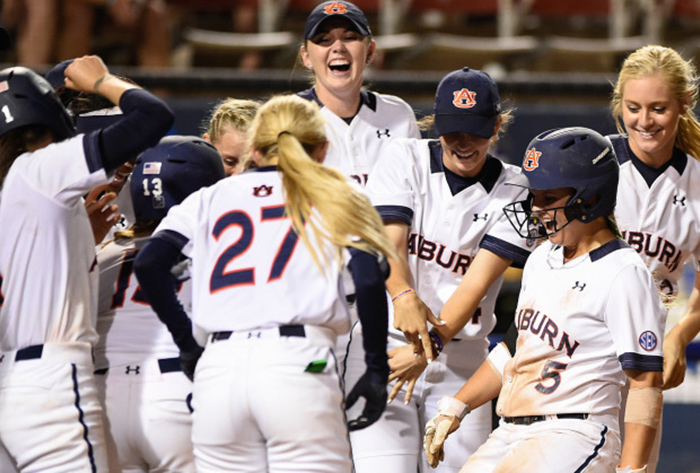 A five-run second, a home run robbing catch and shutout relief outings also played key roles in the Tigers’ (58-11) epic comeback, which was completed when Carosone sent the first pitch she saw over the rightfield fence. The long ball also snapped the the Sooners' 31-game winning streak.

No team before Auburn had erased a bigger deficit to force a game-three in the series. It also matched the biggest WCWS comeback, tying Baylor’s 8-7 come-from-behind win over Kentucky in 2014.

After surrendering six runs in the second and falling behind 7-0, Auburn counterpunched with a five-run, two-out rally in the bottom half of the second. Whitney Jordan cranked a three-run home run to put the Tigers on the board. An error allowed Victoria Draper to reach and extend the inning. Auburn took advantage as Tiffany Howard stroked a RBI triple to left and Kasey Cooper drove an RBI single to right, cutting Oklahoma’s lead to 7-5.

Howard, who later saved the game with her glove, was 4-for-5 with a triple, three runs scored and a RBI.

Cooper (2-for-4, HR, 3 RBI, 2 R) evened things up in the fourth with a two-run shot to right off of relief pitcher Jayden Chestnut.

Shay Knighten thought she had put the Sooners (56-8) back on top in the sixth, but leftfielder Howard made the catch of tournament, pulling back a would be two-run homerun for the final out of the frame.

Over the final seven innings, Auburn’s Rachael Walters and Makayla Martin limited OU to five singles and did not walk a batter. Walters entered in the second, induced a double play grounder and allowed just four singles over five innings of work. Martin tossed the final two innings, retiring the final six batters after a leadoff infield single in the seventh. She earned the win to improve to 15-3.

Oklahoma grabbed a 1-0 lead in the first and extended it to 7-0 with its six-run second. Kady Self started the rally, lining a leadoff homer over the left centerfield fence. Back-to-back successful squeezes by Caleigh Clifton and Knighten made it 5-0. Sydney Romero and Nicole Pendley capped off the inning with RBI singles.

Chestnut, who entered in the second, suffered the defeat. She went the final 5.2 inning, surrendering six runs, 11 hits, walking two and striking out three.