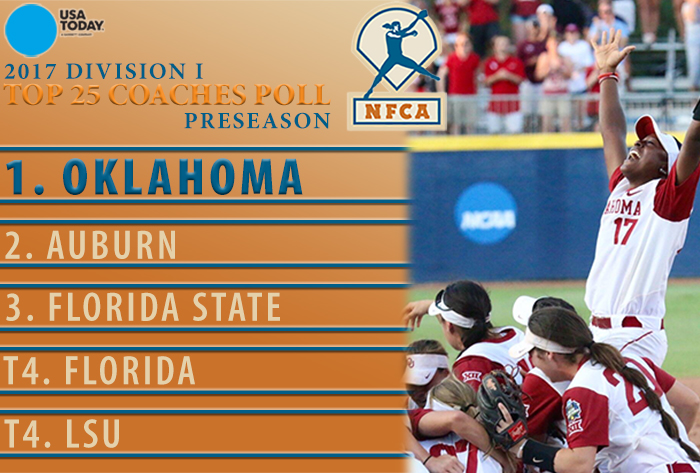 LOUISVILLE, Ky. – Oklahoma, the 2016 national champions, is the unanimous No. 1 selection in the 2017 USA Today/NFCA Division I Preseason Coaches Poll, announced the Association on Tuesday morning.

The Sooners (57-8), who collected their program’s third national title, received all 32 first-place votes and 800 points to garner the first unanimous preseason pick since Arizona State in 2012. Under the guidance of head coach Patty Gasso, OU defeated preseason No. 2 Auburn in a thrilling three-game championship series. They open the season on Feb. 9 in Puerto Vallarta, Mexico against preseason No. 2 Auburn, a rematch of the 2016 WCWS Championship series, and BYU.

Auburn (58-12) earned 745 points after a runner-up finish at the Women’s College World Series. The Tigers start a run of four Southeastern Conference programs in the top 7 and nine in the top 20.

As previously mentioned, the SEC led the way with nine selections, all in the top-20. Along with three top-10 programs, the Pac-12 follows with five representatives. The Atlantic Coast Conference, Big 12 and Big Ten each boast two teams in the top-25, while the American Athletic Conference, Colonial Athletic Association, Conference USA, Mountain West and Sun Belt garnered one nod apiece.

The USA Today/NFCA Division I Top 25 Poll is voted on by 32 NCAA Division I head coaches, one representing each conference. Final 2016 records are shown, first-place votes are in parentheses.