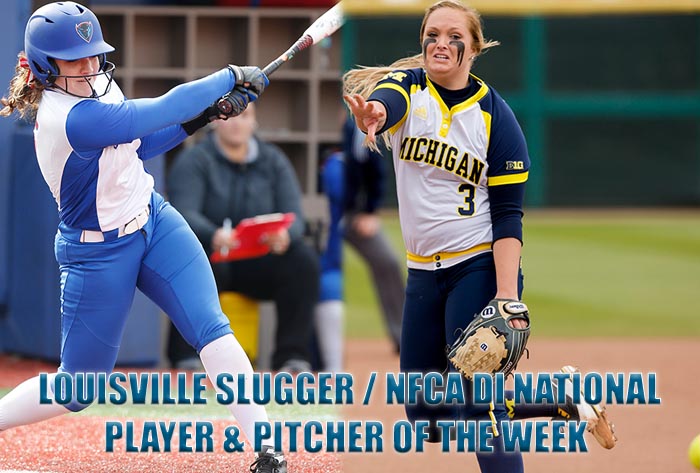 Maize, a native of Franklin Park, Ill., had a strong week both in the circle and at the plate, helping the Blue Demons to a 4-1 week. The senior righty went 3-0 with a save and 36 strikeouts in 22 innings of work. She posted a 0.64 ERA and limited her opponents to just eight hits. Maize also checked in with a .500 batting average, a double, two home runs, six RBI and five runs scored.

"I am so honored and excited to be able to represent DePaul and my teammates,” Maize said. “This is a wonderful honor. I couldn’t have done it without my teammates and coaches. I am so excited for what the rest of the season holds.”

In her most dominant outing of the week, Maize tossed a complete-game four hitter with a career-high 14 strikeouts and just one walk, while also going 2-for-4 with a home run in a BIG EAST series clinching win over Butler. She tossed a five-inning one hitter with nine punchouts and added a homer and three RBI in the series opener. versus the Bulldogs. In a pair of non-conference mid-week games, she went the distance against Loyola, allowing a run on two hits with nine strikeouts, and also notched a three-inning save, fanning four in a 6-4 win against Purdue.

“It’s a great acknowledgement and tremendous accomplishment for Morgan to be named National Player of the Week,” said head coach Eugene Lenti. “To be named the best player in the country in any given week is truly something the DePaul community can be proud of.”

Betsa was a standout for the Wolverines in their rivalry games at Michigan State and at home against Ohio State. The McDonough, Ga. native was 3-0 with a minute 0.70 ERA and 38 strikeouts in just 20 innings of work. She started the week with back-to-back shutouts against the Spartans and Buckeyes.

"I just felt really good all weekend. My spin has been working, and I've been able to get ahead of the hitters. I'm way more effective that way and can use a lot more of my pitches. I've been working hard to cut down on my walks. My defense can't defend walks. It took a long time to learn that, but I finally get it. I think that's been the biggest thing."

Betsa fanned 13 in her first two starts, holding the Spartans to a pair of hits in a 3-0 victory and the Buckeyes to four in a six-inning win. The junior righty closed out her stellar week with 12 more Ks in a three-hit complete game win.

"Megan pitched fantastic all weekend,” said head Carol Hutchins. “She was just tough. She didn't allow herself to go in any other direction but stay in her moment. She did her part, kept us in the game and got us through some tough situations. She has worked really hard, and she should be proud of how hard she has worked at it."