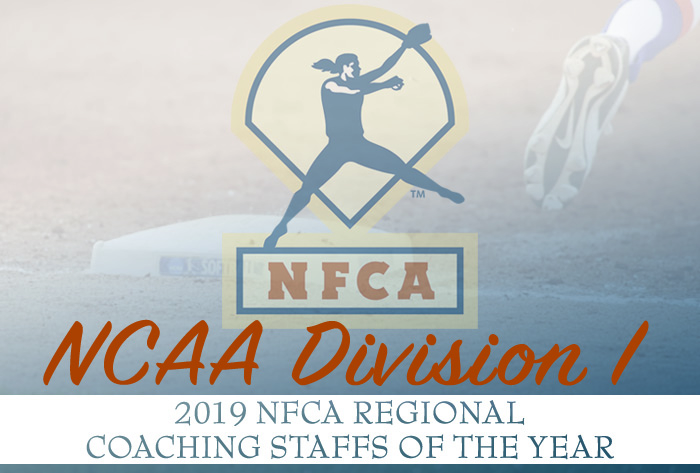 LOUISVILLE, Ky. – Eleven programs were honored by the NFCA as 2019 Division I Regional Coaching Staffs of the Year, announced the Association Tuesday afternoon.

Representing each of the NFCA’s 10 Division I regions, these respective coaching staffs – Oklahoma, Minnesota, Virginia Tech, Louisiana Tech, Southeast Missouri State, Oklahoma State, James Madison, Washington, Alabama, Florida, UCLA– garnered Coaching Staff of the Year honors. These 11 programs are eligible for the NFCA’s Division I National Coaching Staff of the Year award, which will be announced on June 26.

Earned share of the OVC regular-season title… As the No. 1 seed, captured the OVC tournament, its first since 1999, winning three elimination game, the final two over No. 2 seed Jacksonville State… Program-record 46 wins… Earned automatic bid into NCAA Tournament, its first appearance in 20 years… Posted 1-2 mark at Oxford Regional, picking up a win over Chattanooga… Mark Redburn named OVC Coach of the Year.

Earned first WCWS berth since 2011 and eighth in program history… Swept through regional play as No. 13 seed… Knocked off defending champions Florida State in Tallahassee to be the only road team to win a super regional… Defeated No. 5 Florida in WCWS opener… Most victories since the 1994 squad won 46… Finished sixth in finalUSA Today/NFCA Top-25 Coaches Poll.