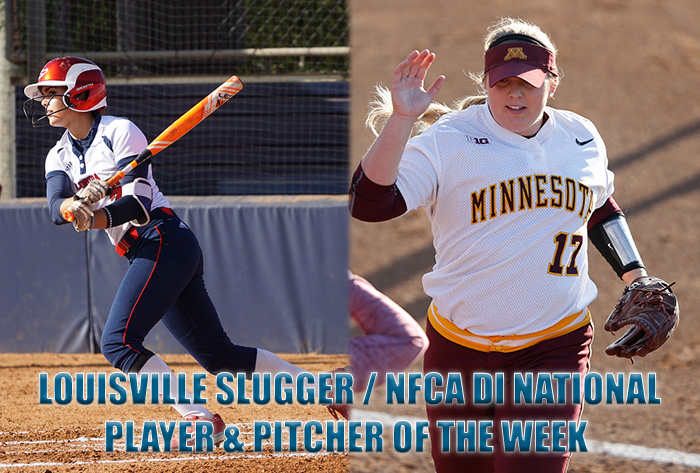 “Playing so well and winning the conference title in the final home series of my career was an exciting, emotional, one of a kind experience,” Martinez said. “I couldn’t have done it without every single one of my teammates.”

In the opener, Martinez drove in a season-high six runs behind a 3-for-4 effort at the dish with two doubles. She followed that outing, by going 3-for-3 in the nightcap with another double, two RBI and a stolen base in a 5-3 win that clinched the conference crown. Martinez capped off the weekend with a two-run double in a 6-0 win.

“Mel stepped up with her performance at the plate and led us to a sweep of Western Kentucky,” said head coach Joan Joyce. “She is certainly deserving of the award.”

Groenewegen was nearly perfect in her nine innings of work last weekend against Rutgers. The junior righty did not allow hit or run, struck out 18 and walked just one to earn a pair of wins in Big Ten play. She twirled a five-inning no-hitter with 10 strikeouts and a walk in the series opener.

“It is an honor to be recognized as pitcher of the week,” said Groenewegen. “This past weekend versus Maryland went very well and I had full trust in my defense, which allows me to throw all of my pitches with confidence. There were some big time plays made by my teammates, which ultimately made my box score hitless. I am proud of the way we played as a team, especially with all of the run support that we had.”

The White Rock, B.C. native followed by tossing four perfect innings in the series finale before being removed to start the fifth. Greoenewegen struck out seven of the first nine batters and finished with eight punchouts. Earning her second recognition of the season, she improved to 25-5 on the year with a 1.87 ERA and 268 strikeouts.

“This is a tremendous honor for Sara and our program,” said head coach Jessica Allister. “Sara is putting together an unbelievable season on the field, but more importantly is a great teammate off the field. She cares about her teammates successes, and celebrates them like they are her own. We are very proud of Sara.”