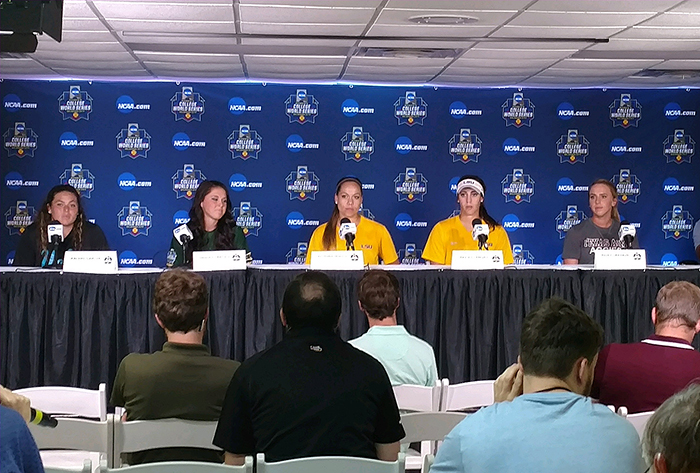 OKLAHOMA CITY – Fifty-five student-athletes from 36 different institutions were selected to one of three 2017 NFCA Division I All-American teams, the Association announced on Wednesday afternoon. Additionally, the NFCA announced its annual Diamond Sports Catcher of the Year and New Balance/NFCA Golden Shoe award.

The three conferences - Big 12, Pac-12 and Southeastern Conference - that are represented at this year’s Women’s College World Series have 17 selections, including six student-athletes on the first team. In all, the SEC led the way with 13 honorees, while the Pac-12 racked up 10 accolades and the Big Ten came in with nine selections. The Atlantic Coast Conference (6), Big 12 (5), Conference USA (3) and Sun Belt Conference (3) also had multiple plaudits.

Jaquish takes home the first team honor, the first of her career, at the Designated Player or Utility-Non-Pitcher position to go along with a pair of second team accolades (2016 & 2014) and a third-team distinction in 2015. The All-SEC selection is the 33rd player in the history of the NFCA as well as the first player in LSU’s annals to receive this very esteemed distinction. In 2017, Jaquish is batting .331 with team-best 12 doubles, .521 on-base percentage, 60 walks and 60 RBI to go along with nine home runs and 40 runs scored. Earlier this season, the Highland, Calif., native set the program’s all-time record for RBI with 260.

Lindaman earned the nod in addition to being named Big Ten Freshman and Player of the Year. She finished off a tremendous rookie campaign with a .426 batting average, 63 hits, 63 walks, 20 home runs, 76 RBI, a .598 on-base percentage and a .899 slugging percentage. A top-3 Schutt Sports/NFCA Freshman of the Year finalists, Lindaman is third in the NCAA in walks and on-base percentage, tied for third in runs batted in, fifth in slugging, and leads all NCAA freshmen ranking seventh in home runs. Additionally, Lindaman was named the Diamond Sports Catcher of the Year for her outstanding work behind the plate in 2017.

Barnhill, who was named USA Softball Collegiate Player of the Year on Tuesday evening at the Women’s College World Series banquet, is having a dominant season in the circle for the Gators. The sophomore pitcher leads the NCAA with a miniscule 0.36 ERA, 13.4 strikeouts per seven innings, a 9.8 strikeout-to-walk ratio and has allowed the fewest hits per seven innings at 2.74. The SEC Pitcher of Year is 24-3, allowing just 68 hits and holding her opponents to a .117 batting average. Barnhill also boasts 12 shutouts and 333 strikeouts to just 34 free passes.

Good, a junior, earned the first-team nod at Utility Pitcher. The CAA Player and Pitcher of the Year collected an NCAA-best 38 victories. She is tied for the NCAA lead with 14 shutouts and is tied with the second-lowest ERA at 0.63. The three-time All-American finished 2017 with a 38-3 record, 271 strikeouts to just 35 walks, while holding her opposition to a .147 batting average. As the Dukes’ leading hitter, she batted .383 with 11 doubles, 12 homers, 58 RBI and 34 runs scored.

Earning the first of five at-large selections on the first team is Gregg. The junior has had a career campaign for the Volunteers. She is leading the team and setting career highs with a .440 batting average, 70 hits, 18 doubles, 14 home runs, a single-season school record 77 RBI, .830 slugging percentage and .555 on-base percentage. Most notably, Gregg ranks second in the country in RBI, eighth in on-base percentage and 11th in batting average.

Joining Barnhill as a first-team pitcher is Groenewegen. The senior righty makes her third appearance as an All-American, being named to the first team for the second straight year. Groenewegen guided the Gophers during their record-breaking season, including a No. 1 ranking in the USA Today/NFCA Top 25 Coaches Poll. Posting her best season in the circle, she went 31-4 with a 0.63 ERA and 307 strikeouts. Her ERA is tied for second in the NCAA, while her strikeouts and strikeouts per seven innings rank eighth nationally. The Big Ten Pitcher of the Year finished her career as the Gophers’ all-time career strikeout record holder with 1,214.

Flippen is a three-time All-America recipient, earning her second straight first-team nod. The senior was named Pac-12 Co-Player of the Year and leads the league with a .424 batting average, a .513 on-base percentage and ranks in the top 10 in slugging (.728), RBI (50), triples (3), total bases (115), doubles (12), runs (46) and home runs (10). A defensive standout, Flippen committed just seven errors and posted a .969 fielding percentage at second base for the Utes.

Sanders is the nation’s top power hitter and the final unanimous first-team selection. She leads NCAA Division I with 29 home runs, 82 RBI, and a monstrous 1.013 slugging percentage. Over half of the junior’s hits went for extra bases, which included 13 doubles. The Sun Belt Player of the Year reached base at a .524 clip, while turning in an unprecedented offensive campaign in 2017.

Joining Barnhill and Groenewegen as a first-team pitcher is Danielle O’Toole of Arizona. The red-shirt senior southpaw garnered her first All-American selection to close out her collegiate career. O'Toole, the Pac-12 Pitcher of the Year and top ten finalist for USA Softball Player of the Year, leads the Pac-12 with a 1.21 ERA and 210 strikeouts. She recorded nine shutouts, including five vs. ranked opponents. O'Toole, who held opponents to a .184 batting average, was a two-time Pac-12 Pitcher of the Week and also swept Louisville Slugger/NFCA’s & USA Softball’s national player of the week honors one time this season.

The  first-team selection at first base is freshman Jessie Harper from Arizona. A Pac-12 first team all-conference honoree and top 11 finalist for Schutt Sports/NFCA National Freshman of the Year, Harper launched the second most home runs in the country as a rookie, ranking eighth with 19. She is second in the Pac-12 with a .793 slugging percentage, and ranks in the league’s top 10 in round trippers, RBI (56) and total bases (134).

Leading off a trio of first-team outfield selections is LSU senior Bailey Landry. The Tigers’ all-time hits leader paces the team with a .409 batting average, 90 hits, 14 stolen bases, nine triples and 51 runs scored. Her triples are tied for second in the NCAA and her total hits rank third. Earning her second All-America honor, she registered a .448 on-base percentage in helping the Tigers reach their third straight Women’s College World Series.

Rounding out the All-American outfield selections on the first team is Florida sophomore Amanda Lorenz. Garnering SEC first-team All-Conference accolades, Lorenz has started every game for the Gators, leading the team with a .390 batting average, 69 hits, 56 runs scored and a .667 slugging percentage. The two-time All-American has also registered 10 doubles, three triples, 41 RBI , 44 walks and a .534 on-base percentage

A first-team at-large choice is Florida State redshirt senior pitcher Jessica Burroughs. The ACC Pitcher of the Year is garnering her second consecutive All-American plaudit. Posting a 27-5 record and 1.22 ERA, Burroughs was a top-10 finalist for USA Softball Player of the Year. In 44 appearances and 34 starts, she recorded seven shutouts, four saves and 266 strikeouts to 31 walks. She held her opponents to a .158 batting average and owns a 8.6 strikeout-to-walk ratio.

Joining the first team as an at-large selection is Alabama junior pitcher Alexis Osorio. One of the toughest pitchers to hit in NCAA Division I, Osorio is garnering her second All-American honor. While ranking fifth in the NCAA with 334 strikeouts and 11.5 strikeouts per seven innings, she has allowed just 80 hits in 203 innings of work for a miniscule .118 batting average against. A first-team All-SEC selection, Osorio ranks second nationally, surrendering 2.76 hits per seven innings and ninth with a 1.21 ERA.

Filling the next spot on the at-large first team is Florida’s Delanie Gourley. The senior southpaw earned her third straight All-America honor and second on the first team. She ranks third in the NCAA in fewest hits per seven innings at 3.7 and fourth with a 0.67 ERA. She owns a 21-4 record with 12 shutouts and two saves, while holding her opponents to 75 hits and a .142 batting average.

Rounding out the at-large nods on the first team is senior shortstop Nikki Udria of Oregon. A first-team All-Pac 12 honoree and two-time All-American, Udria is hitting .396 with a team-best 67 hits, 10 home runs, 51 RBI and .627 slugging percentage. Additionally, she has nine doubles, recorded a .490 on-base percentage and was named to the Pac-12’s all-defensive team.

Marshall’s Elicia D’Orazio was selected as the New Balance/NFCA Golden Shoe award recipient for NCAA Division I. The accolade is presented to a player determined to be the most outstanding base stealer. The junior infielder leads the NCAA with 59 steals and also has swiped a Division I-best 1.09 bases per game. She also hit .397 with a team-high 49 runs scored.