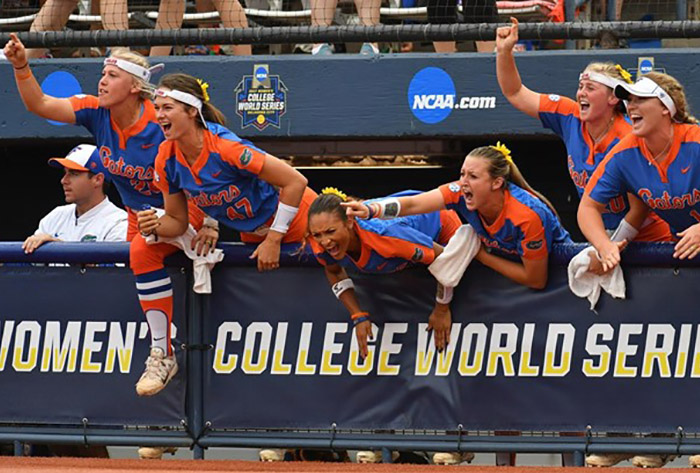 OKLAHOMA CITY – In front of 9,658 fans, Florida and Oklahoma picked up wins over LSU and Washington, respectively, on day two of 2017 Women’s College World Series at USA Softball Hall of Fame Stadium/OGE Energy Field. With the victories, the Gators (57-8) and Sooners (58-9) earn spots in the semifinals on Sunday.

Tomorrow’s action starts with Texas A&M vs. UCLA at noon ET, followed by Oregon and Baylor at 2:30 p.m. ET. The winners of those games will meet the the Huskies (49-13) and Tigers (48-21) in the second session for a spot in the semifinals.

Barnhill struck out eight and walked three, recording her 13th shutout of the season. It marked the Gators’ program-record 40th of the season. Amanda Lorenz led the offense with a 3-for-4 night. She recorded a double and an RBI. Kayli Kvistad and Janell Wheaton provided the punch, each homering for the Gators and knocking in two runs.

The Gators opened the scoring in the fourth. Chelsea Herndon roped a two-run double into the leftfield corner, plating Aleshia Ocasio and pinch runner Alex Voss. Wheaton added a run in the sixth with a no-doubter to left, making it 3-0.

A four-run seventh, highlighted by a Kvistad two-run homer, gave Florida a comfortable seven-run cushion. Kvistad’s long ball was sandwiched by a Lorenz RBI single and a Wheaton sac fly.

Sahvanna Jaquish and Bailey Landry recorded singles for LSU. Starter Carley Hoover took the loss, allowing two runs on four hits in four innings of work. She struck out two and walked one.

Parker allowed a run on just three hits with six punchouts and one walk to improve to 25-5. Paige Lowery came in with one out and a runner on first. She slammed the door shut with a strikeout and ground out for her ninth save which tied for the NCAA lead.

Fale Aviu finished 1-for-3 with a run and knocked in what proved to be the game-winning RBI.

Taran Avelo (32-8) suffered the defeat for the Huskies. In six innings of work, she allowed three runs, two earned, on five hits with a strikeout and walk. Madi Schreyer relieved her and pitched a perfect seventh.

The Sooners got on the board in the top of the second. Lea Wodach dropped down a surprise two-out bases loaded bunt and Aviu was able to go around Huskie catcher Morganne Flores and score the first run of the game.

Aviu doubled the Sooners’ advantage in the fifth, dropping a two-out RBI single into right center. The run was unearned as Kelsey Arnold, who scored, opened the inning by reaching on an error.

Sydney Romero tacked on an insurance run in the sixth with a leadoff home run, a moonshot to left.

Ali Aguilar spoiled the shutout with one out in the sixth when she got hold of a low pitch and sent it deep into the night down the rightfield line.

Flores and Kelly Burdick recorded singles for the Huskies.