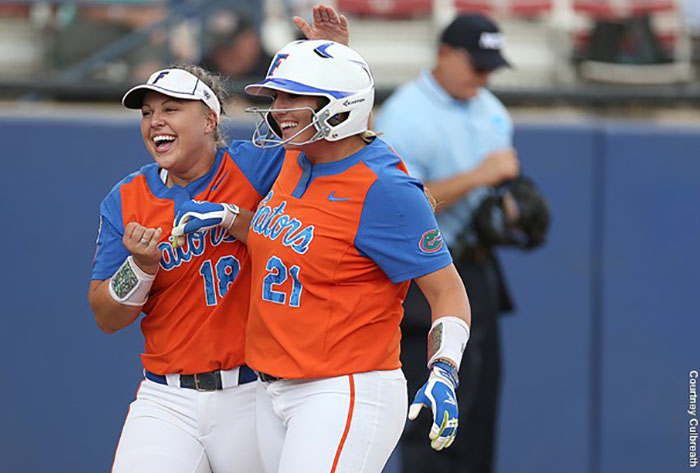 First pitch for game one of the series is set for Monday, June 5 at 7 p.m. ET.

Florida scored four runs in the first two innings and Delanie Gourley held Washington to two hits as the Gators (58-8) defeated the Huskies (50-14), 5-2 to secure a spot in the finals of the WCWS.

Gourley did not allow an earned run and struck out 10 to improve to 22-4.

Kayli Kvistad crushed a one-out solo home run in the top of the first to give UF an early 1-0 lead.

The Gators pushed their advantage to 4-0 courtesy of three-run, four-hit second. Amanda Lorenz knocked in the first run with a RBI single back up the middle. Kvistad made it 4-0 with a two-run single to right-center.

The Huskies took advantage of a two-out error in the seventh. After the miscue extended the inning, Julia DuPonte hit a two-run home run for the final 5-2 margin.

Kvistad finished 2-for-4 with three RBI and a run.

After Oregon scored twice in the bottom of the fifth, Oklahoma answered with four runs in the top of the sixth to earn a 4-2 win and advance to its second straight championship series.

Danica Mercado provided the Ducks (54-8) with a 2-0 lead by hitting a two-run home run in the fifth. The Sooners (59-9) wasted little time to rally.

Leah Wodach reached on a two-base throwing error after dropping down a two-strike bunt. Mendes drove in the first run with a fielder’s choice grounder up the middle. After a sac bunt moved runners to second and third, Shay Knighten delivered the go-ahead single with a bloop just beyond first base that plated both runners. Nicole Pendley added an insurance run with a RBI double to right field.

Paige Parker (26-5) picked up the win and improved to 8-0 all-time at the WCWS. She allowed two runs on five hits with four strikeouts and zero walks in five innings. Paige Lowary threw two perfect innings to record her NCAA-best 10th save, breaking the program’s career saves record in her first season.

Knighten and Kelsey Arnold each went 2-for-3. Knighten drove in two.