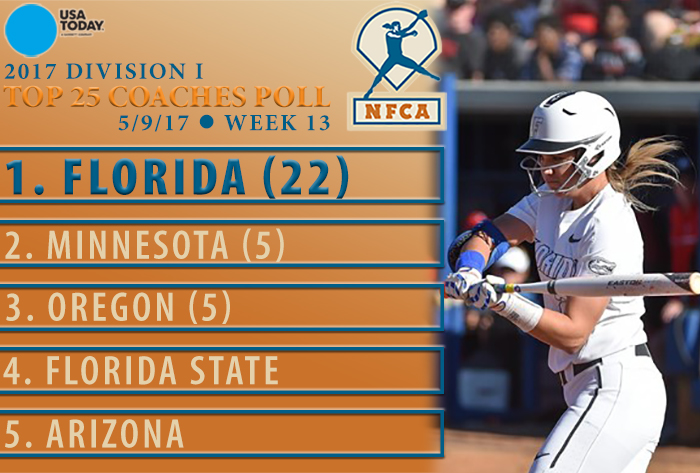 LOUISVILLE, Ky. – Florida continued its hold on the No. 1 ranking, while a streaking Minnesota and an Oregon squad, who swept then-No. 2 Florida State, jumped into the top three in this week’s USA Today/NFCA Division I Top 25 Coaches Poll.

Florida closed out its regular season with four straight wins after a tough mid-week 11-inning loss (1-3) at Florida State. The Gators (50-5) received 22 first-place votes and 782 points as they secured their ninth 50-win season in program history. UF, who heads into the SEC tournament as the top seed, was dominant in the final four contests, sweeping North Texas (8-0, 9-0, 8-1) and capping off the week with a 7-0 shutout against Bethune-Cookman.

The Gophers (51-3) own the longest active winning streak in Division I at a school-record 22 games after closing out their regular season with a three-game Big Ten sweep at Penn State (11-1, 14-1, 10-1). Minnesota, which received five-first place votes and 754 points, finished 22-1 in league play and earned their first Big Ten regular season title since 1991. The Gophers also collected 50 victories for the first time in program history.

The Ducks (44-6) gathered five first-place votes and 744 points as they moved into the No. 3 spot after sweeping a top-five series from the Seminoles (48-6-1) in Eugene over the weekend. Oregon picked a decisive 11-0 win in game one of a doubleheader and edged the Seminoles in the nightcap, 3-1. They walked off with the sweep, a 2-1 victory in nine innings, courtesy of Gwen Svekis’ sac fly.

Oklahoma remained at No. 6 following a Bedlam sweep of Oklahoma State (3-0, 6-2, 1-0), which included a combined no-hitter in the finale. The Sooners (47-8) enter the Big 12 Tournament as the No. 1 seed and will face Texas in their opener.

Auburn jumped two spots to No. 7 as it took two-of-three at then-No. 13 Alabama. The Tigers (45-9) opened with 3-0 (9) and 4-1 wins, clinching a series in Tuscaloosa for the first time in program history. The Crimson Tide edged the Tigers on the final day of the season, 3-2.

Two Southeastern Conference programs entered the top-25 this week as No. 24 South Carolina makes its first 2017 appearance, while No. 25 George returns after a one-week absence.

The 2017 USA Today/NFCA Division I Top 25 Poll is voted on by 32 NCAA Division I head coaches, one representing each conference.  Records reflect games played through May 7.

The USA Today/NFCA Division I Coaches Poll is voted on by 32 NCAA Division I head coaches, one representing each conference.  Records reflect games played through May 7.