Florida returns to No. 1 in USA Today/NFCA Division I Top 25 Coaches Poll 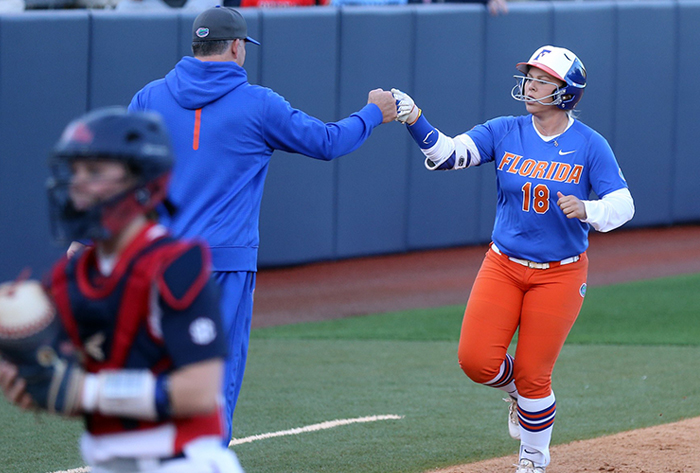 LOUISVILLE, Ky. – Just a week after dropping out of the top position for the first time this season, Florida returned to familiar territory as the No. 1 team in this week’s USA Today/NFCA Division I Top 25 Coaches Poll.

The Gators (38-3) received 26 first-place votes and 794 points as it picked up four road wins last week. They edged in-state rival UCF, 3-1 in a mid-week matchup and followed that with a three-game SEC sweep of Ole Miss in Oxford, outscoring the Rebels, 18-3.

After grabbing the No. 1 ranking for the first time since 2011, Michigan (29-4) dropped the opener in a Big Ten series at RV Nebraska. The Wolverines, who received three first-place votes, were edged by the host Huskers, 1-0, but bounced back with 4-1 and 8-6 triumphs to claim the series.

Three through seven remained the same with No. 3 Auburn receiving two first-place nods and No. 4 Alabama one. The Tigers (37-4) went 4-0 in non-conference action, picking up a mid-week road win at Troy (8-1) before sweeping a closely contested three-game series from Longwood (2-1, 5-2, 6-5). The Crimson Tide also enjoyed a 4-0 week at home, outscoring their visitors from the Magnolia State 37-2. They blanked Mississippi Valley State (14-0) and swept Mississippi State (7-1, 8-0, 8-1).

No. 5 Louisiana-Lafayette and No. 6 Oregon finished a combined 8-0 and in the process reached the 30-win plateau. The Ragin’ Cajuns brought their brooms to Atlanta as they trumped Sun Belt foe Georgia State in all three matchups (4-1, 6-5, 12-0). The Ducks (32-6) rebounded from last week’s Pac-12 setback against UCLA with five wins. Oregon defeated Portland State twice (7-1, 11-3) and swept the Civil War series from in-state rival Oregon State (6-1, 4-3, 9-0) in Corvallis.

No. 11 LSU fell out of the top-10 for the first time this season after suffering home defeats in the first two games of its SEC series against new-No. 14 Kentucky. The wins for the Wildcats bumped them up two spots.

For the second straight week, there were no departures from or new entries to the poll.The USA Today/NFCA Division I Top 25 Poll is voted on by 32 NCAA Division I head coaches, one representing each conference. Records reflect games played through April 10, 2016.