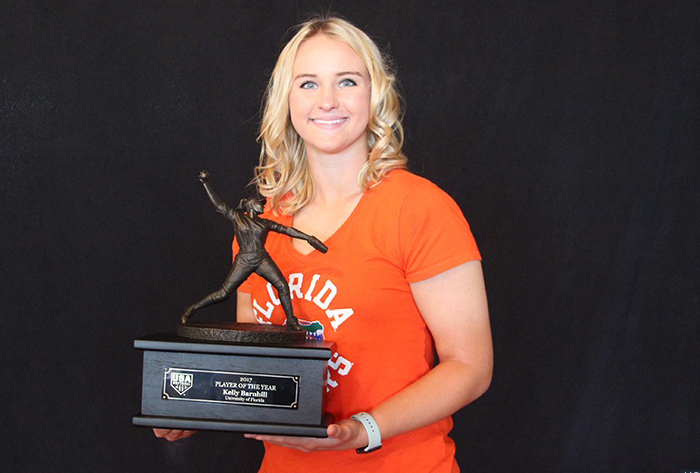 OKLAHOMA CITY — USA Softball, the National Governing Body of Softball in the United States, announced that Florida’s Kelly Barnhill was named the 2017 USA Softball National Collegiate Player of the Year. The award, which is considered the most prestigious honor in Division I women’s softball, is designed to recognize outstanding athletic achievement by female collegiate softball players across the country. This season, Barnhill helped lead Florida to its eighth NCAA Women’s College World Series (WCWS) appearance, where the Gators will look to take back the NCAA title for the first time since 2015.

“It’s really amazing to be chosen for this award as just a sophomore,” said Barnhill.  “There are so many amazing players out there and to be honored at such a young age is a special accomplishment.”

The 2017 Southeastern Conference (SEC) Pitcher of the Year, Kelly Barnhill leads the nation with a 0.36 ERA and ranks in the Top 10 in shutouts and strikeouts.  In just her sophomore season at the University of Florida, Barnhill has racked up First-Team All-SEC honors and boasts a 24-3 record with 333 strikeouts and only nine earned runs allowed through Super Regional play.  Behind the arm of Barnhill, who was named an NFCA First Team All-Region honoree, Florida earned the No. 1 overall seed in the NCAA Softball Championship.

Notable 2017 performances for Barnhill include 14 wins and nine shutouts over Top 25-ranked opponents this season.  Earning SEC Pitcher of the Week five times this season, the first pitcher in Florida history to do so, Barnhill has thrown four no-hitters in her sophomore campaign.

“The first thing that I can say is to attribute a lot of her success to just how much she’s embraced being a competitor and her tremendous work ethic,” said Florida Head Coach Tim Walton.  “Not only have her teammates embraced her, but she’s embraced her teammates and is really becoming very comfortable in being a quiet superstar.  She’s very humble and very driven.”

The other two finalists for the 2017 award were 2017 Colonial Athletic Association (CAA) Pitcher and Player of the year Megan Good (James Madison) and 2017 SEC Player of the Year Meghan Gregg (Tennessee).

The USA Softball Collegiate Player of the Year award is voted on by coaching representatives of 10 Division I Conferences in the 10 USA Softball Regions, members of the media who consistently cover Division I Softball across the country as well as past winners of the award.