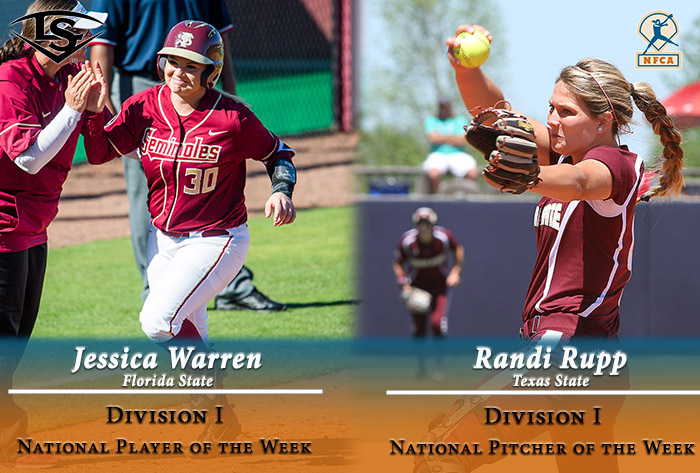 Warren was a hard out as she was dominant at the plate in the top-ranked Seminoles’ ACC series road sweep of Syracuse. Recording multiple hits, runs and RBI in each game, Warren hit .667 (6-for-9) with all six hits going for extra bases on two doubles and four home runs. She homered in each game, recorded nine RBI, scored eight runs and slugged 2.222 helping the offense put 37 runs in three games. Additionally, she posted a .750 on-base percentage, drawing a pair of walks without striking out. The junior third baseman knocked in four runs and scored three times in game two and left the yard twice and drove in three runs in the finale.

“It’s an honor to win this award, but none of it would have been possible without my teammates,” said Warren. “Everyone producing offensively and defensively throughout the weekend allowed me to be successful and led us to the wins we had at Syracuse. Ellie’s (Cooper) grand slam, Cali’s (Harrod) home run to win it on Sunday, JB (Jessica Burroughs) getting so many strikeouts and everyone else contributing makes it easy for me to relax because I have so much trust in everyone around me. This is such a fun team to play with and our coaching staff has been amazing all season long.”

Rupp keyed Texas State last week, earning all four wins as the Bobcats knocked off Texas and swept South Alabama on the road in Sun Belt Conference play. She was 4-0 with a 0.00 ERA, two shutouts, struck out 29 and held her opponents to a .157 batting average in 25.2 innings. The junior righty opened the week with a nine-inning complete-game victory over Texas, surrendering an unearned run on five hits with seven strikeouts in a 2-1 walk-off victory. In game one at USA, she fanned 12 in a six-hit shutout and wrapped up the series sweep with a two-hit, six-strikeout shutout. In between starts, Rupp tossed the final two innings of relief, recording four strikeouts and allowing a hit as the Bobcats scored late in a 1-0 victory.

“I feel honored to receive this award, but it couldn’t have been done without the help of my teammates and coaches,” said Rupp. “We have been working very hard as a group and I loved seeing our hard work paying off for us past week. We have great things ahead of us and I cannot wait to see what all can accomplish as a team these next couple of weeks.”