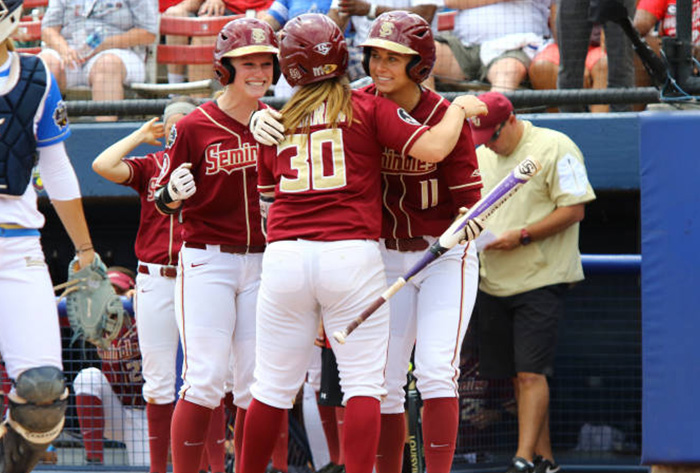 OKLAHOMA CITY – Florida State fell behind 4-0 in the first inning, but scored eight unanswered runs to stay alive at the Women’s College World Series and defeat No. 12 UCLA, 8-4 in the first elimination game on day three at ASA Hall of Fame Stadium.

The Seminoles will face the loser of the Michigan and Oklahoma game tomorrow at 12:00 CT.

Powers finished 4-for-4 with a double, home run, RBI and two runs scored. Leadoff Morgan Klaevemann knocked in a career-high four runs and swiped two bases to bring her total to 52 on the season.

Burroughs, who came in with two outs and the bases loaded, recorded the final out of the first on a deep fly ball to center and retired 19 of the final 21 UCLA batters. The junior only allowed a pair of singles and struck out two, improving to 28-5.

Before an out was recorded in the bottom of the first, Sataraka, on a full count pitch, launched a grand slam to centerfield for an early 4-0 lead. The Bruins had an opportunity to lengthen that lead in the same inning, but Allexis Bennett’s deep fly was tracked down by Klaevemann to save three more runs and end the threat.

Alex Powers responded in the top half of the second with her first-pitch blast to rightfield. With two outs, Klaevemann drew a two-out bases loaded to cut UCLA’s lead in half

FSU claimed the lead for good with a three-run third. Another first-pitch leadoff home run, this time by Warren, cut the deficit to 4-3. Powers and Sydney Broderick followed with a double and single to put runners on the corners. Powers came home on a successful squeeze by Cali Harrod, and during Harrod’s rundown, Broderick scored for a 5-4 Seminole lead.

Klaevemann knocked in the final three runs for the Seminoles. She extended Florida State’s lead to 7-4 with a two-out, two-run single back up the middle in the fifth and added an insurance run with a bunt single in the seventh.

UCLA’s Paige McDuffee suffered the loss in an inning of relief work. She allowed three runs on three hits with a walk. Kylee Perez recorded two of Bruins' seven hits.