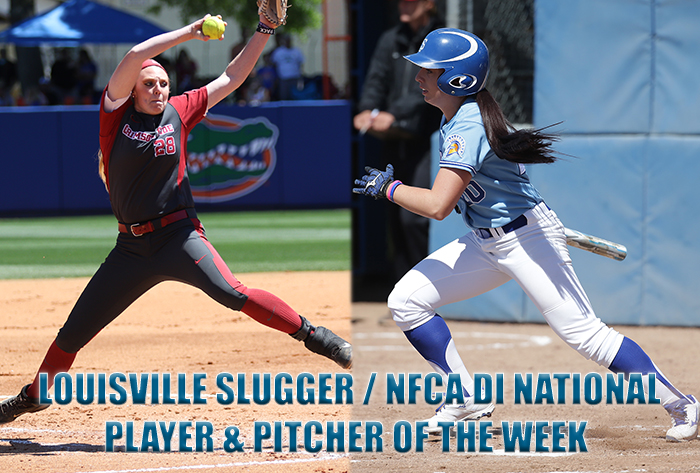 Hufstetler was an extra-base hit machine to help San Jose State to a 5-1 start in Mountain West play with a series sweep of UNLV and two victories at Colorado State. Nine of Hufstetler’s 12 hits went for extra bases (four doubles, three triples, two home runs) as she slugged 1.333 and hit .571 with 12 RBI and eight runs scored. She recorded a hit in all six games, multiple base knocks in five and more than one extra-base hit in four contests.

“A few weeks ago, with the help of Assistant Coach Chase Turner, I made a couple of small changes in my swing,” said Hufstetler. “I started seeing the results in the last couple of games in the preseason and it really took hold in during both series last week.  I’ve been seeing the ball well all year, but it all seemed to click against UNLV and Colorado State.”

The senior first baseman knocked in four and scored four runs scored in the sweep of UNLV. Hufstetler, a native of Atascadero, Calif., registered two doubles in a 9-1 win and closed out the series with a pair of triples in the 6-3 win. In the series-clinching win against the Rams, she clubbed two three-run home runs and crossed the dish three times.

“Jessie started the season slowly, but we knew it was just a matter of time before she got locked in and started really pounding the ball,” said head coach Peter Turner. “Now, and this week in particular, she produced at a level that both she and our staff are accustom to seeing. She continues works very hard at her craft and the results show, both during the season and on the program's career list.

Littlejohn was instrumental in all three of Alabama’s SEC victories, including two against then-No. 1 Florida in Gainesville. She went 3-0 with a 1.15 ERA against two top-notch offenses. The Rusk, Texas native held a potent No. 15 Missouri offense to two runs on four hits as the fourth-ranked Crimson Tide clinched the series in her first start of the week.

“I’m very thankful for this prestigious honor from the NFCA and am blessed from above with the opportunity to play this game,” said Littlejohn. “I am very thankful for my teammates and how they backed me up on defense and gave me the run support on offense.”

In two starts against the top-ranked Gators, Littlejohn allowed just one run on seven hits, including just one for extra bases, in 13.1 innings of work. The junior righty handed Florida its first home loss of the season on Friday and first SEC series-opening loss in nearly two years. She limited the Gators to five hits and a run in 6. 1 innings. In the series clincher on Sunday, she handed Florida its first shutout of the season with a two-hit gem, which was also the first time UF had been shutout at home since 2014.

"Sydney was terrific last week against two of the best teams in the country,” head coach Patrick Murphy said. “She has matured tremendously as a player and person and we are seeing the results of that on the field. Syd's hard work in the bullpen with our pitching coach Stephanie VanBrakle is certainly paying off."