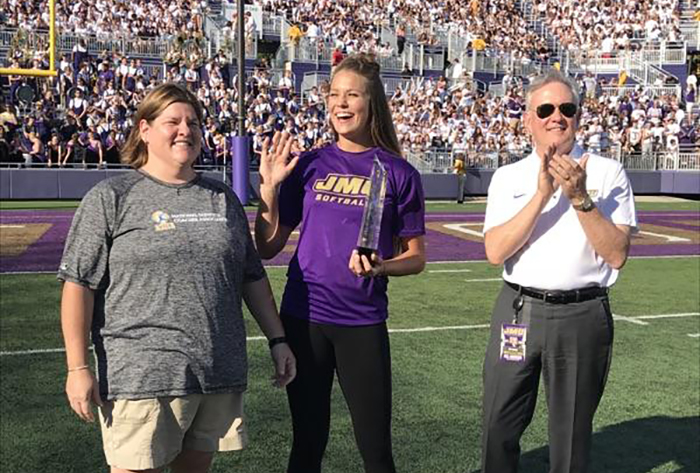 HARRISONBURG, Va. – Megan Good received her 2017 Schutt Sports/NFCA Division I National Player of the Year trophy from NFCA Director of Education and Division I liaison Joanna Lane in an on-field ceremony before a near-record football crowd of 25,993 on Oct. 14 at Bridgeforth Stadium/Zane Showker Field.

The pitcher/utility standout was the first softball player in school history to be a national player of the year, after a record-breaking junior season.

The righty led Division I in victories, going 38-3 in the circle, and tied Tulsa’s Emily Watson for most shutouts (14), both of which were James Madison single-season records. Her 0.63 earned-run average ranked third in the country and was another program record.

Good was also great on offense, with a team-leading .383 batting average and a career-high 69 hits. Her 58 runs batted in led the Colonial Athletic Association (CAA) and were the third-most for a season in James Madison history.
She amassed 19 multi-hit games and posted a team-best 17 multi-RBI games, including two five-RBI contests. Good had 11 doubles, a team-leading 12 homers and a .644 slugging percentage, which ranked second among CAA players. She walked 28 times en route to a .464 on-base percentage.

The crowd for top-ranked James Madison’s 30-8 Football Championship Subdivision victory over 11th-ranked Villanova, trailed only the 26,069 that attended the Dukes’ Oct. 24, 2015 matchup against Richmond.
The matchup of top Colonial Athletic Association teams drew ESPN’s “College GameDay” program to campus earlier in the day.