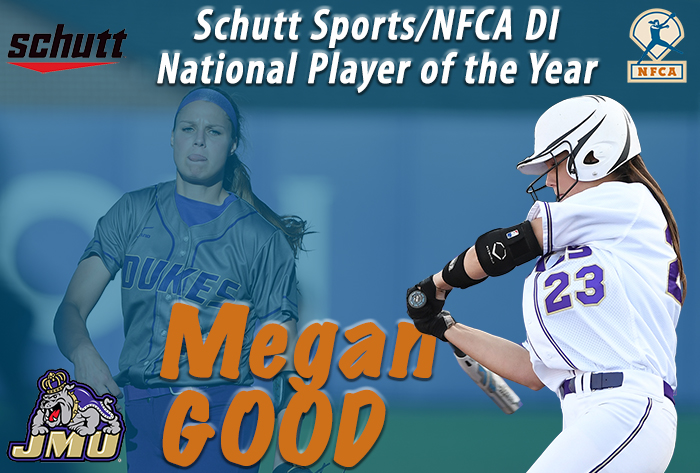 LOUISVILLE, Ky. – James Madison junior Megan Good has been named the 2017 Schutt Sports/NFCA Division I National Player of the Year, announced the Association on Thursday afternoon.

Good, a 2017 unanimous NFCA First-Team All-American, led the nation with a JMU single-season record 38-3 mark and her 14 shutouts tied a NCAA best. Her 0.63 ERA is a JMU single-season low and is tied for the second lowest mark in all of Division I softball. Her ERA was helped by a scoreless inning streak of 70.1 innings, the 11th-longest streak in NCAA history and the longest streak by any player since 2009.

“It’s very humbling,” Good said of the honor. “There are so many student-athletes across the country and in our conference that I have competed against. They are all great athletes, so it’s an honor to receive the award. I could not have done it without my teammates and coaching staff being there for me throughout these three years.”

Over 244.2 innings of work, Good allowed just 22 earned runs off 125 hits and 35 walks, while striking out 271 batters. Earlier this season, Good became JMU's all-time leader for wins, closing her junior season with a 99-9 career mark. In the circle, Good either tied or set a total of 13 single-season pitching records, including ERA, batting average against (.147), walks allowed per seven innings (1.00), wins and shutouts.

Good, who was the Dukes top offensive threat, hit .383 with a CAA-best 58 RBI. The CAA’s first student-athlete to sweep Player and Pitcher of the Year honors, Good recorded 11 doubles and a team-best 12 home runs for a .644 slugging percentage. Aided by 28 walks, Good closed the year with a .464 on-base percentage.

Additionally, the Mount Sidney, Va. native, was named the ECAC Pitcher of the Year, a finalist for USA Softball Collegiate Player of the Year and one of four Division I nominees for the Honda Sport Award for Softball.

“It’s a great honor for our program,” head coach Mickey Dean said. “Our team puts in a lot of hard work and effort, so to have one of our players selected as the nation’s best because of her efforts and competitiveness is a tremendous honor.”

The award was voted on by the members of the NFCA’s NCAA Division I All-American and Coaching Staff of the Committee. Good is the second recipent of the award and joins the company of inaugural winner Sierra Romero of Michigan.