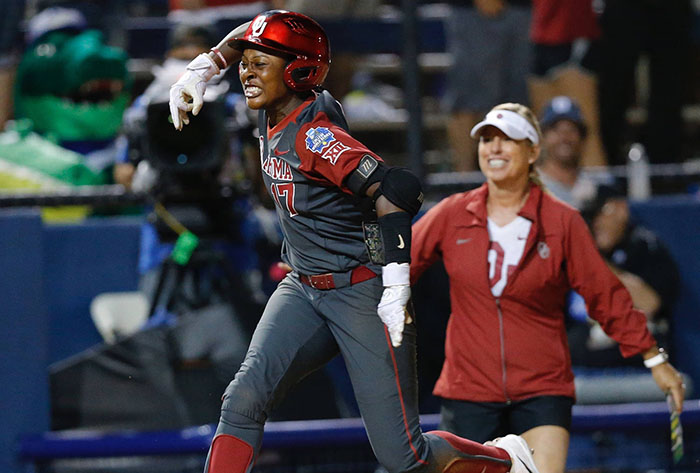 OKLAHOMA CITY – Shay Knighten’s three-run home run in the top of the 17th lifted Oklahoma to a 7-5 win over Florida in an epic game one of the WCWS Championship series, Monday evening at USA Softball Hall of Fame Stadium/OGE Energy Field.

The top of the 17th started with a pair of Kelly Barnhill strikeouts before the OU rally started. Nicole Mendes singled and Caleigh Clifton was plunked. On a 1-2 pitch, Knighten launched a high home run into the leftfield bleachers for the game-winning long ball.

The Gators would not go down quietly in the bottom half of the frame. They loaded the bases with one out and scored a run on an Amanda Lorenz sac fly, but starter Paige Lowary, who reentered in the 14th, fanned Kayli Kvistad to end the comeback bid.

Both starters reentered- Lowery in the 12th and Barnhill in the 16th- and factored into the decisions. In her first start since April, Lowary (16-3) scattered eight hits in a combined 10.1 innings. She allowed two runs, struck out seven and walked one.

Barnhill (26-4) went the first seven and totaled nine innings in the defeat. She surrendered five runs on six hits with 13 punchouts and two walks.

An Aleshia Ocasio two-out RBI single in the bottom of the fourth gave UF a 1-0 lead.

The lead didn’t last long as OU evened the contest at 1-1 in the top half of the fifth. Sydney Romero tied the game with a RBI single back up the middle. An inning later, Nicole Mendes crushed a go-ahead home run into the right field bleachers.

The Gators evened the contest with two outs in the bottom of the seventh. With Ocasio on first following a leadoff walk, Sophia Reynoso stepped up with two outs and hit what looked like a routine fly ball to left center off reliever Paige Parker. However, with the outfielders playing near the warning track to prevent a double the ball dropped in off of diving leftfielder Macey Hatfield’s glove for a game-tying double.

After being no-hit for four innings by reliever Delanie Gourley, OU recorded its first hit off the southpaw, a Shay Knighten double, to lead off the 12th. Fale Aviu took the next pitch and deposited over the right field fence for a 4-2 lead.

The Gators, down to their last strike again, matched the Sooners with a two-run inning of their own in the bottom half of the 12th. The first two batters reached on a walk and single. After a pair of outs, Paige Lowary reentered to face Amanda Lorenz. The lefty leadoff came up big, stroking a two-run game-tying double to the gap in left center. Lorenz finished 2-for-7 with three RBI

The Gators got out of bases loaded jams in the 15th and 16th innings. Gourley worked out of the jam inducing a fielder’s choice groundout to shortstop. An inning later, Barnhill reentered with a 2-0 count on the second batter. Following two walks sandwiched around a flyout, the righty induced a chopper to first for a fielder’s choice and then struck out the pinch hitter to end the threat.