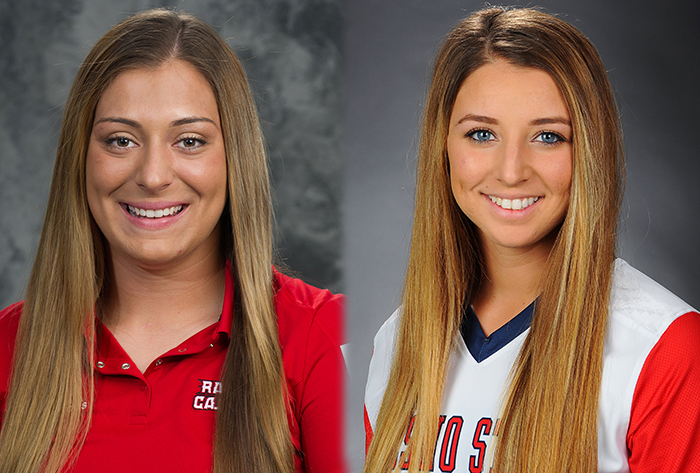 LOUISVILLE, Ky. – Louisiana-Lafayette’s Lexie Elkins and Fresno State’s Jill Compton were named the Louisville/Slugger NFCA Division I National Player and Pitcher of the Week, respectively on Tuesday afternoon. Elkins and Compton each helped their respective squads to 5-0 starts over the opening weekend of the 2016 season.

Elkins, a senior from Victoria, Texas, clubbed five home runs, recorded seven extra-base hits, knocked in 14, scored eight runs and slugged a whopping 1.800 to help the seventh-ranked Ragin’ Cajuns sweep the competition at the Sand Dollar Classic and move into the top-10 of the USA Today/NFCA Division I Top 25 Coaches Poll. Batting .667 (10-for-15), the catcher homered in three of her five contests, which included a school-record tying three long balls in the final game against Louisiana Tech.

"I prepared like I would for any other game,” said Elkins. “I know this year that whenever I can't get it done - just like last year - others are going to be able to step up behind me, so I can play free. Even if I'm unable to do what I want to, there's no reason to get upset because someone else behind me will have my back. I'm thankful for the award, but our goal is to win a national championship and take it game by game and that's what I'm focused on."

In the opener against 2015 NCAA participant Ball State, Elkins doubled, homered, knocked in five and scored four more times in a 22-4 triumph.  The Sun Belt Player of the Week added a 4-for-4, three RBI performance against UAB and against Louisiana Tech, Elkins left the yard in her first two at bats, recorded four RBI and scored three more times.

"What Lexie has been able to accomplish, in terms of her performance when she does it, brings recognition - her home run power, incredible hand-eye, competitiveness and pitch recognition,” commented head coach Michael Lotief. “We get to be around her day in and day out and see another side of her. We see how she's grown as a leader, how hard she works in preparing each day, how she's a tireless leader and how humble she is every time the spotlight shines on her. She's very thankful to her teammates around her, the people in the community and the University that support her. The quality of who she is as a person and how she goes about her business every day, makes her extremely special and unique."

Compton, the Mountain West Pitcher of the Week, attributed to four of Fresno State’s five wins at the Kajikawa Classic in Tempe, Ariz. last weekend. Capped off by a complete-game shutout against then-RV Utah, the Oceano, Calif. native finished 3-0 with a 0.33 ERA, one save and 17 strikeouts.  Against the Utes, Compton scattered seven hits struck out three, walked two batters and only allowed one runner to reach third base.

"To be nationally recognized is truly an honor after all of the hard work I've put in alongside my teammates,” said Compton. “It feels amazing to start on such a great note, our goal this season was to be a Top 25 program and achieving that today is extremely motivating as it increases our team morale and confidence."

She tossed six shutout innings with seven strikeouts in a season-opening victory over Indiana and added a complete-game (3 H, 6 K, 1 BB) triumph over Boston College. In addition, she struck out one to earn a save against Seattle. For the week, the senior righty hurled 21 innings, recorded two complete games and held opponents to a .171 batting average.

"What a great honor for Jill and our program,” said head coach Trisha Ford. “Jill had a great weekend and that is what you look for in a senior pitcher, to come out on week one ready to go."

Selected Top Performances
James Madison’s Megan Good finished 2-1 - a win over then-No. 17 UCF- with a 0.00 ERA, a save and 21 strikeouts in earning CAA Pitcher of the Week honors... SEC Player of the Week, LSU’s Sahvanna Jaquish hit .692 (9-13) with two doubles, a home run, nine RBI and a .765 OBP in five games at the Tiger Classic... Florida Atlantic hurler Kylee Hanson tossed a no-hitter against Tulsa and finished the weekend 2-0 with a 0.40 ERA, 27 strikeouts and a save to garner the Conference USA Pitcher of the Week plaudit... Washington’s Julia DePonte opened the season with a .500 average, five extra-base hits, nine RBI and six runs scored at the Sportco Kick Off Classic... Pacific’s Cassidy Gustafson, the West Coast Conference Pitcher of the Week, finished 2-0 with a 0.50 ERA, which included a complete-game five-hit victory at then No. 3 LSU... Big Ten Player of the Week, MJ Knighten of Nebraska, batted .632, slugged 1.474 with five home runs, 14 RBI and eight runs scored... American Athletic Conference Pitcher of the Week, UCF’s Shelby Turnier defeated No. 5 Alabama and went 2-1 with a 1.47 ERA and 17 strikeouts in 19 innings... South Alabama’s Emily Messer hit .722 (13-18) with seven runs scored and four stolen bases...  Courtney Rotton of UCF garnered AAC Player of the Weeks honors after batting .571 with eight RBI, which included a 4-for-4, 5 RBI performance against No. 5 Alabama... New Mexico State’s Emma Adams picked up WAC Hitter of the Week honors after hitting .615 with eight hits, three doubles and 10 RBI over five games...Ronnie Ladines of Kent State went 3-0 with a save, 0.88 ERA and 22 strikeouts NMSU’s Karysta Donisthorpe went 3-0 with 0.00 ERA, struck out 16, walked none and held opponents to a .163 average in 11 innings of work to garner WAC Pitcher of the Week accolades... Washington’s Taran Alvelo earned complete-game victories over then No. 9 Oklahoma and then-No. 14 Minnesota with 11 strikeouts and 2.00 ERA... MVC Pitcher of the Week, Brianna Jones of Southern Illinois, tossed two complete-game shutouts, struck out 16 and limited her opponents to a .192 batting average... BIG EAST Pitcher of the Week, St. John’s Madison Morris, tossed a five-inning no-hitter with three strikeouts in her collegiate debut... Tennessee’s Erin Gabriel was named SEC Pitcher of the Week after going 2-1 with a 0.97 ERA and 34 strikeouts in 21.1 innings of work... Kansas’ Daniela Chavez clubbed three home runs, knocked in 10, while batting .588 (10-17) and posted a 1.118 slugging percentage.