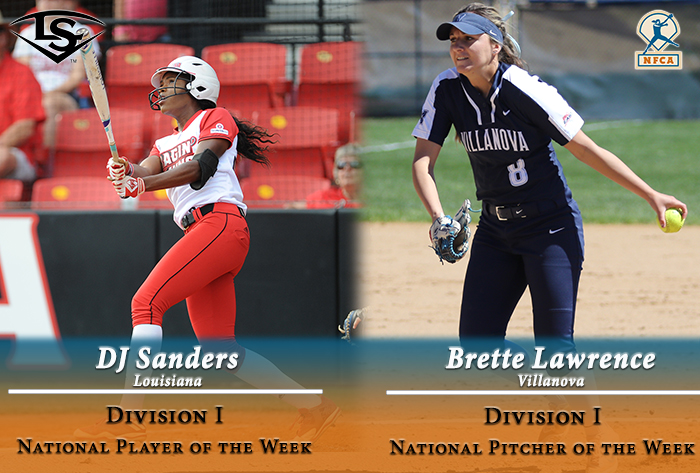 Sanders was a familiar site on the base paths last week. She reached base safely in 14 of 15 plate appearances and scored all but once, totaling 13 runs. The junior from Columbus, Miss. also drew nine walks and recorded a .933 on-base percentage. When she did have a chance to swing the bat, Sanders recorded five hits (5-for-6), four of which left the park, and drove in 10 runs. She opened the scoring with a two-run first-inning homer in a 11-9 road win at then-No. 4 Texas A&M. Sanders also drew a pair of two-out walks that set up a grand slam and a base-clearing double. In the first two games of a Sun Belt doubleheader versus Georgia State, she was 4-for-4 with three dingers, seven RBI and seven runs scored. Her four long balls brought her NCAA-leading total to 27.

“We have a plan that changes for each pitcher and Coach Mike does a good job preparing us for what’s coming,” Sanders said after Saturday’s performance at the plate. “We spend all week preparing for it, so I’m not up there guessing what the pitcher is going to throw. It just so happens that when I square it, it usually goes out, but it’s only because of the preparation that Coach Mike has put in.”

Highlighted by a perfect game against St. John’s, Lawrence was 5-0 with a 0.76 ERA and 21 strikeouts to just three walks in 27.1 innings of work. While holding St. John’s offense, who owned the BIG EAST’s top batting average, scoreless in two starts, the senior from Sparks, Nev. limited her opposition to a .194 batting average. In the six-inning perfecto, Lawrence struck out four Red Storm batter in an 8-0 win. A day earlier, she surrendered four hits, struck out seven and did not walk a batter in a complete-game 2-0 triumph over St. Johns. Additionally, she earned a complete-game win over Monmouth and collected a pair of wins against Fairleigh Dickinson in which she did not allow a run and struck out five in seven innings of work.

"Everyone was energetic and ready to play well, so it made my job easy,” said Lawrence. “I knew in my mind as the game went on that it was a perfect game, but we all kept it to ourselves until it actually happened. The last inning was nerve-wracking, but I kept telling myself to throw one pitch at a time and throw my best pitch. I knew my defense would be right behind me, just like they were all game."