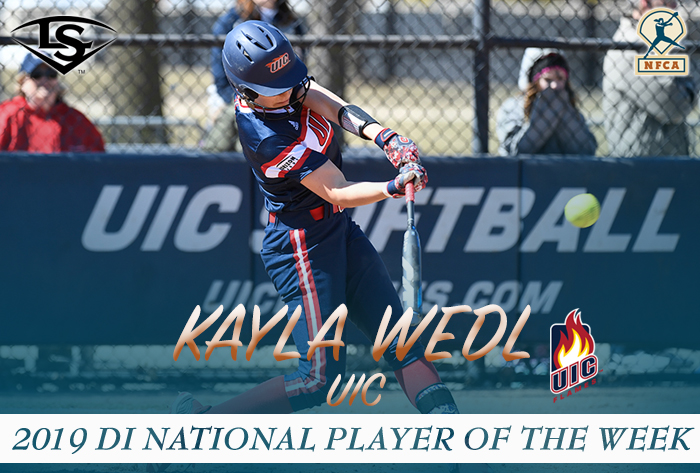 Wedl powered her way to a second career NFCA weekly honor by hitting .636 (14-for-22) with six home runs, 16 RBI and 14 runs scored over six games last week. The junior shortstop slugged 1.500 and recorded a .609 on-base percentage. Riding a 12-game hitting streak, Wedl left the yard in four of those contests, cranking two each in game two of UIC’s three-game Horizon League series versus IUPUI and Northern Kentucky, respectively.

The Horizon League Player of the Week also generated five RBI and scored three times in those previously-mentioned contests. Additionally, Wedl posted four multi-hit games, including four in game two versus the Norse and three in the final two matchups with the Jaguars. The Waucond, Ill. native currently leads the Horizon League with 49 RBI, 12 more than the next player.

Scali tossed her second no-hitter of the year and finished the week not allowing a single run over 22.2 innings of work. The rookie hurler finished 4-0 with three shutouts, 32 strikeouts and three walks. She scattered eight hits and held her opposition to a .107 batting average. Scali, a native of Parma, Ohio, was an error away from a perfect game against Robert Morris as she struck out 11 and faced just one batter over the minimum.

Scali twirled a pair of two-hit shutouts against Pitt and Akron, fanning eight and five batters, respectively. In her final outing of the week against the Zips, the five-time MAC Pitcher of the Week tossed 5.2 innings of shutout relief (four hits) with eight punchouts.