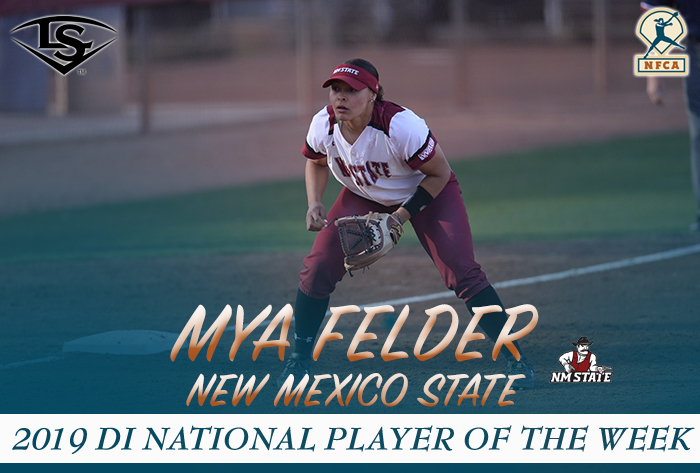 LOUISVILLE, Ky. – New Mexico State’s Mya Felder was selected the Louisville/Slugger NFCA Division I National Player of the Week, while Washington’s Taran Alvelo and Minnesota’s Amber Fiser shared the Pitcher of the Week recognition as the Association’s final weekly honors of 2019 were announced. It marks the third honor for Fiser, her second of 2019, and it is the second time Alvelo has received the plaudit with her first coming in 2017.

Felder had a big week for the Aggies as she hit .706 (12-for-17) with four multiple-hit contests and 11 RBI,  helping her squad to a three-game sweep of Cal State Bakersfield and a win over then-No. 17 Texas Tech. The rookie third baseman poked three doubles and two home runs, slugged 1.235 and was perfect defensively at the hot corner in 15 chances. In the WAC series opener versus the ‘Runners, Felder doubled twice, homered and drove in six runs. She was 3-for-4 with a longball, and two runs scored in an upset win over the Red Raiders. Felder also doubled and registered two RBI in game one against Texas Tech.

Avelo played a part in all three of the second-ranked Huskies’ wins at No. 6 Arizona. She was 2-0 with a 0.57 ERA and a save. The Carroll, Ohio native surrendered one run, scattered nine hits and struck out 18, holding the Wildcats to a .196 batting average. She struck out the only batter she faced to earn a save in the series-opening 2-1 victory. The senior hurler came back with a complete-game performance in game two (W, 3-1) in which Alvelo allowed a run on eight hits with 11 strikeouts and one walk. She capped off her weekend with five innings of one-hit shutout relief, allowing Washington to secure a 7-4 win.

Fiser, who hails from Van Horne, Iowa, allowed just three hits and struck out 25 in 16.2 innings of work to help the 12th-ranked Gophers take two-of-three from then-No. 19 Northwestern in Big Ten play. The junior righty limited the Wildcats to a miniscule .059 batting average, which included a near no-hitter in the rubber match. On May 5, Fiser took a no-hitter into the seventh and finished with a one-hit shutout, striking out eight. She fanned seven straight, including two when she entered with the bases loaded, in 2.2 innings of relief work during a game two win. Despite suffering a 1-0 loss in the opener on a seventh-inning wild pitch, the Big Ten Pitcher of the Week fanned 10 and allowed just two hits in the complete-game effort.