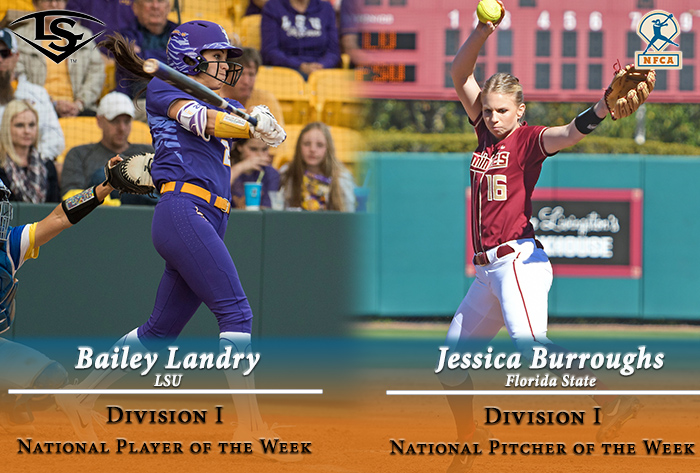 Landry, a Prairieville, La. native, led the seventh-ranked Tigers at the plate with an .813 average (13-for-16), 1.375 slugging percentage, .778 on-base percentage and 10 RBI. Enjoying a career week, she recorded multiple hits in four of the five games, including two doubles, two triples, a home run and seven runs scored.

“It’s such a great honor to be even considered for this award. It means a lot to me because it means so much for the program and LSU,” Landry said. “It’s reflection of the hard work that we put in and it’s an honor and blessing to be considered for it.”

At one point on the weekend, Landry reached base safely in eight consecutive plate appearances, including a hit in six straight at bats. The senior outfielder finished a single short of the cycle against Georgia Southern, opening with a triple, followed by a double and a three-run home run. Named SEC Player of the Week, Landry also drove in four runs in back-to-back contests.

Dominant in her four appearances last week, Burroughs went 3-0 without allowing a run in 13. 2 innings of work. Her efforts helped the Seminole achieve the No. 1 ranking for the first time in the program’s storied history. She surrendered just three hits with two walks and 23 strikeouts. For the week, the Warner Robbins, Ga. native faced eight batters over the minimum and held her opponents to a mere .067 batting average.

“The big thing about these kinds of awards are that they are a team accomplishment,” said Burroughs. “I couldn’t do anything without my teammates playing behind me or hitting in all of those runs. I’m really honored to receive this award, but I think it speaks to the depth of our pitching staff. We challenge each other in practice every day and I feel less pressure when I pitch because I know that any of them would be able to come in and do a great job for the team if I get into trouble.”

Burroughs, who was named ACC Pitcher of the Week, earned the win in relief against Northwestern on February 17, tossing 2.2 innings of no-hit softball as the Seminoles came from behind for a 3-2 victory in the first of four ACC/Big Ten Challenge contests. In her start against Northwestern, the red-shirt senior fanned the first six batters she faced and finished with nine strikeouts in 5.0 innings, allowing just two batters to reach base. Burroughs, has not allowed a run in her last 20.1 innings in the circle, followed that with a one-hit, eight-strikeout, five-inning outing against Nebraska.