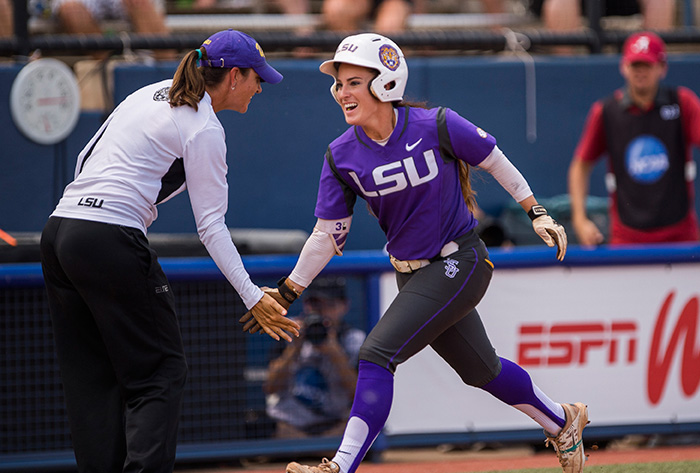 OKLAHOMA CITY – LSU jumped out early and held off a late Alabama rally to earn a 6-4 win in the second elimination game on day three of the Women’s College World Series at ASA Hall of Fame Stadium.

Sandra Simmons led the game off curling a home run around the rightfield foul pole. The Tigers added a second run on a RBI ground out by Kellsi Kloss in the third.

After Alabama got on the board courtesy of a Leona Lafaele RBI single in the bottom of the third, LSU grabbed a 6-1 lead with four runs in the top half of the fourth, highlighted by a two-out, two-run double off the bat of Sahvanna Jaquish.

The Crimson Tide got back into the game with a three-run sixth. Lafaele started it off with a leadoff home run to left. Chandler Dare knocked in the second run of the inning with a single to right center. Following a pitching change to Allie Walljasper, a swinging bunt by Andrea Hawkins loaded the bases with no outs.

Following a one-out single in the seventh, Walljasper started a 1-6-3 double play to end the game and earn her third save of the season.

Carley Hoover (21-8) picked up the win for the Tigers, going five-plus innings and allowing four runs, three earned on seven hits. She struck out two and walked two.

Simmons and Bailey Landry each went 2-for-3 for the Tigers with Simmons scoring twice and knocking in two runs.

Sydney Littlejohn (23-7) suffered the defeat for Alabama. She went a combined 4.2 innings after reentering in the sixth and allowed four runs on five hits with a strikeout and two walks.

Lafaele finished 2-for-4 with a home run and two RBI and McCleney doubled twice for the Crimson Tide.