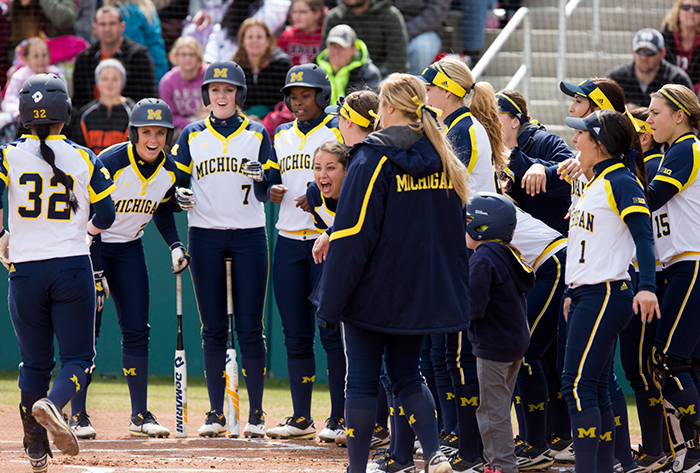 LOUISVILLE, Ky. – Michigan supplanted Florida as the No. 1 team in this week’s USA Today/NFCA Division I Top 25 Coaches Poll. The Wolverines (27-3) picked up 17 first-place votes and 781 points to leapfrog the Gators (34-3) for the first time this season.

The Gators received 10-first place votes and 765 points and were one of five programs to gather first-place nods, along with Auburn (2), Alabama (2) and James Madison (1).

Florida and Alabama locked up in an intense three-game SEC series in Gainesville with the now fourth-ranked Crimson Tide (31-7) winning games one (2-1) and three (3-0) behind the solid pitching of Sydney Littlejohn. The Gators earned a one-run victory (3-2) in game two on Saturday.

Auburn remained in the three-hole following a sweep of then-No. 14 Kentucky in Lexington over the weekend. The Tigers (33-4) opened with a 9-0 triumph before earning a pair of close victories to finish the sweep, 6-5 and 3-1 in nine innings.

No. 5 Louisiana-Lafayette, No. 7 James Madison, No. 8 LSU, No. 9 Florida State and No. 10 Georgia remained in their respective rankings, while Oregon slipped two spots to No. 6. The Dukes (30-2) were the only squad to post an undefeated week as they shut out their opposition in four of five games. The Ragin’ Cajuns (29-3) dropped their opener at No. 19 Baylor (0-2) before rattling off four straight wins to close out the week, including a 4-3 win over the Bears and a three-game Sun Belt sweep of Texas State.

There was some movement over the final 15 spots of the poll, but no new faces made appearances this week.

The USA Today/NFCA Division I Top 25 Poll is voted on by 32 NCAA Division I head coaches, one representing each conference. Records reflect games played through April 3, 2016.