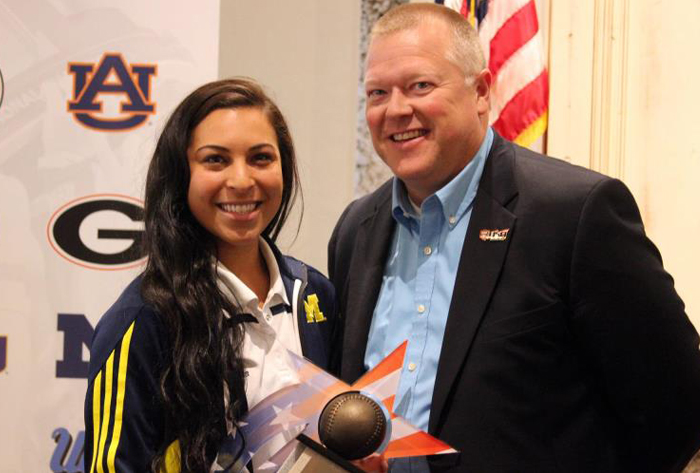 OKLAHOMA CITY — The Amateur Softball Association (ASA)/ USA Softball announced that Michigan senior infielder Sierra Romero was selected as the 2016 USA Softball National Collegiate Player of the Year. The award, which is considered the most prestigious honor in Division I women’s softball, is designed to recognize outstanding athletic achievement by female collegiate softball players across the country. This season, Romero helped lead Michigan to its 12th NCAA Women’s College World Series (WCWS) appearance, where the Wolverines look to build upon runner-up honors at last season’s event. This marks the first time an athlete from Michigan has won the prestigious award and is the first honor for an athlete from the Big Ten Conference.

“It’s an unreal feeling to win the USA Softball Collegiate Player of the Year award,” said Romero.  “I’m glad that my team is here to celebrate it with me.  It would not be the same if I was here without them.  This award is great, and now we focus on the big picture of winning a National Championship.”

The 2016 Big Ten Player of the Year, Romero ranks in the Top 10 in the country with a .465 batting average, 19 home runs and a .585 on-base percentage while ranking in the top-five in the nation with 77 RBI and a .916 slugging percentage.  Earning a unanimous selection to the All-Big Ten first team each year in her career, Romero became just the second player in conference history to garner three Big Ten Conference Player of the Year honors.

In her four seasons at Michigan, Romero has compiled a .444 batting average, crushing out 82 home runs for a career slugging percentage of .889 while compiling a .586 on-base percentage over four years.  Headlining a successful senior class, Romero has helped guide the Wolverines to three trips to the NCAA WCWS and four Big Ten titles.

The other two finalists for the 2016 award were 2016 Southeastern Conference (SEC) Player of the Year Kasey Cooper (Auburn) and First-Team All-SEC honoree Aleshia Ocasio (Florida).

The USA Softball Collegiate Player of the Year award is voted on by coaching representatives of 10 Division I Conferences in the 15 ASA/USA Softball Regions, members of the media who consistently cover Division I Softball across the country as well as past winners of the award.