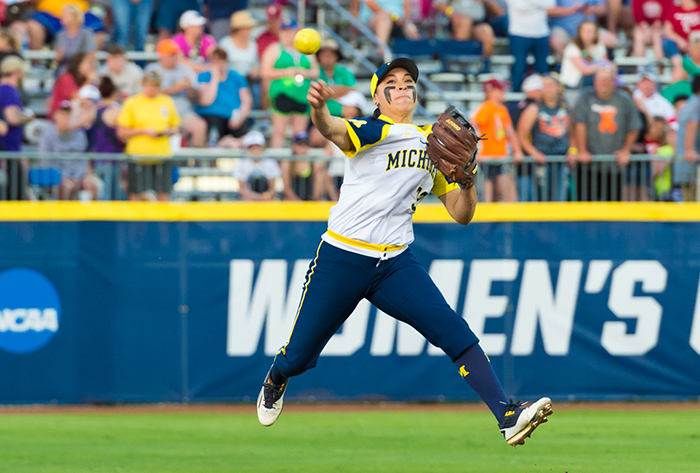 was named the Honda Sport Award winner for softball as announced by Chris Voelz, executive director of the Collegiate Women Sports Awards (CWSA). Romero, a finalist for the award in each of the last two seasons, is the second Michigan student-athlete to garner the prestigious honor since 1977, joining Katie McGregor (cross country, 1999).

The Honda Sport Award has been presented annually by the CWSA for the past 40 years to the top women athletes in 12 NCAA-sanctioned sports and signifies "the best of the best in collegiate athletics." With this honor, Romero becomes a finalist for the Collegiate Woman Athlete of the Year and the prestigious 2016 Honda Cup, which will be presented June 27 on a live telecast on CBS Sports Network from the Founders' Room at the Galen Center on the campus of the University of Southern California in downtown Los Angeles, California.

"It is a huge honor to be named the Honda Award winner," said Romero, "and I am truly blessed to receive such a prestigious award and be recognized among such well-regarded company. I am so proud to represent my family, Team 39 and the University of Michigan."

A native of Murrieta, California, Romero was chosen as the 2016 USA Softball Collegiate Player of the Year and the inaugural recipient of the NFCA Division I Player of the Year. A four-time NFCA All-America selection, including three straight first team nods, she is the first player in NCAA softball history to record 300 runs, 300 hits and 300 RBI in a career. She owns NCAA records in career runs (302) and grand slams (11).

Romero, also a three-time Big Ten Conference Player of the Year and four-time unanimous selection to the All-Big Ten first team, led the Wolverines with a .451 batting average, 76 runs, 73 hits, 19 home runs and 79 runs batted in. She ranked third nationally with 1.29 runs per game and 1.32 RBI per game and sixth with a .577 on-base percentage and .883 slugging percentage.

"We are so proud of this tremendous achievement by Sierra Romero

. "Sierra has set a precedent that will forever remember her as a great Michigan Woman. Winning the Honda Award is our sport's -- and all sports' -- greatest honor, and Sierra could not be more deserving. As outstanding of an honor as this is, however, I am most proud of the woman she has become."

Three other student-athletes from the sport of softball have gone on to win the prestigious Honda Cup: Keilani Ricketts (Oklahoma) in 2013, Natasha Watley (UCLA) in 2003 and Lisa Fernandez (UCLA) in 1993.

The CWSA, celebrating its 40th year, has honored the nation's top NCAA women athletes recognizing superior athletic skills, leadership, academic excellence and eagerness to participate in community service. Since commencing its sponsorship in 1986, Honda has provided more than $3 million in institutional grants to the universities of the award winners and nominees to support women's athletics programs at the institutions.