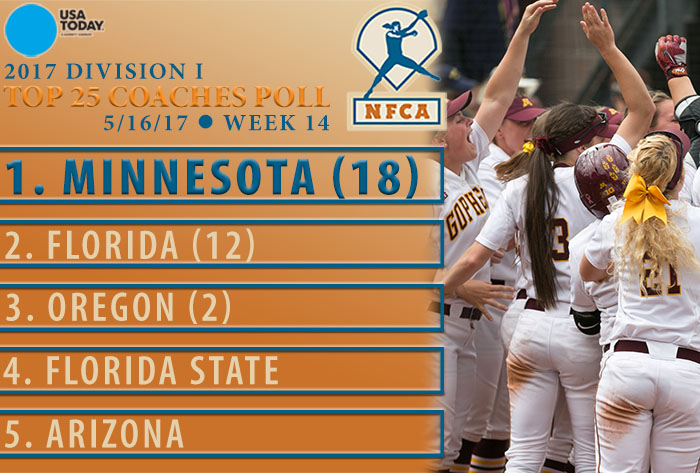 LOUISVILLE, Ky. – Minnesota’s record-breaking season added another milestone as it achieved the program’s first No. 1 national ranking in this week’s USA Today/NFCA Division I Top 25 Coaches Poll. The Gophers (54-3), riding a NCAA DI-best 25-game winning streak, head into the postseason unseeded and will be the No. 2 seed in the Tuscaloosa Regional, hosted by 16th-seed Alabama.

Minnesota received 18-first place votes and a total of 767 points nudging out previous No. 1 Florida by nine points. The Gophers, who are tops in DI with 54 wins and a .947 winning percentage, ran undefeated through the Big Ten Tournament. Highlighted by a Sara Groenewegen no-hitter in the quarterfinals against Northwestern, Minnesota defeated the Wildcats (5-1), RV Illinois (6-5) and RV Ohio State (6-0) to claim its second consecutive tourney title.

The second-ranked Gators (50-6), who received 12 first-place votes and 758 points, are the NCAA’s No. 1 overall seed and will host Florida A&M, Florida International and Oklahoma State this weekend in Gainesville. Florida, who earned the No. 1 seed for the third straight year, fell in the quarterfinals of the SEC Tournament to eventual champion then-No. 19 Ole Miss.

Oregon, Florida State, Arizona and Oklahoma remained in the No. 3-6 rankings. The Ducks (44-6) earned the final two first-place votes and 739 points. Oregon closed out its regular season with a three-game sweep at Stanford (9-2, 8-0, 9-0) and is the No. 3 overall seed in the NCAA Tournament.

The Seminoles (51-6-1) finished off with a ACC Tournament title, knocking off Virginia (16-0), Notre Dame (6-0) and host North Carolina (4-3) for their fourth straight championship. FSU earned the No. 4 national seed and will host No. 25 Georgia, Jacksonville State and Princeton.

The Pac-12 champion Wildcats (48-7) were idle last week and enter the NCAA tournament as the No. 2 overall seed. Arizona welcomes No. 24 South Carolina, RV Saint Francis and New Mexico State.

The Sooners (50-8), who earned the NCAA’s No. 10 overall seed, swept through the Big 12 Tournament not allowing a run, including a 2-0 blanking of Oklahoma State in the title tilt. Oklahoma, which also won the regular season, swept the both championships for the second time, the first coming in 1996.

No. 7 Washington and No. 8 Auburn switched spots this week. The Huskies (43-11) closed out the regular season with a three-game Pac-12 sweep of then-No. 13 Utah on the road, which including a thrilling comeback from a 12-1 deficit to edge the Utes in eight innings, 13-12. The Huskies are the No. 6 overall seed.

The NCAA’s No. 7 overall seed Auburn went 1-1 at the SEC tournament, defeating then-No. 18 Kentucky (2-0) before falling to then-No. 21 LSU in the semifinals.

The 2017 USA Today/NFCA Division I Top 25 Poll is voted on by 32 NCAA Division I head coaches, one representing each conference.  Records reflect games played through May 14.

Dropped Out: No. 23 Marshall

The USA Today/NFCA Division I Coaches Poll is voted on by 32 NCAA Division I head coaches, one representing each conference.  Records reflect games played through May 14.