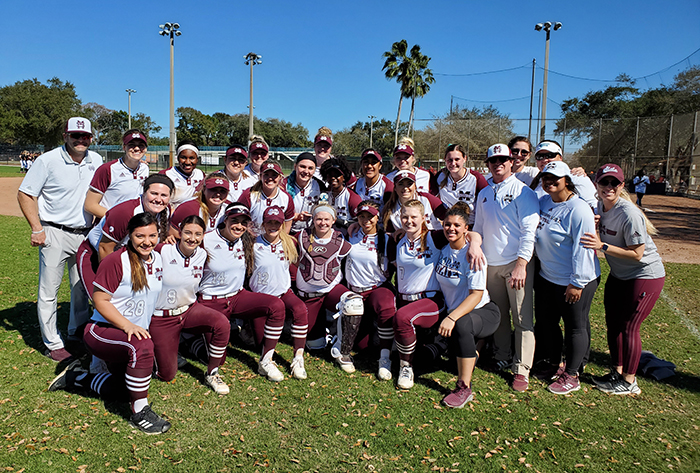 The U.S. National Women’s Team, as part of its “Stand Beside Her” Tour presented by Major League Baseball, wrapped up its five-game set at the tournament, defeating Texas State, 5-2. The highlight of the contest was Bobcat Hailey MacKay cracking a home run off her pitching coach and USA starter Cat Osterman. MacKay finished the game with both RBI.

The Bulldogs, under the guidance of first-year head coach Samantha Ricketts, concluded play with a 9-0, five-inning win over North Carolina State. Chloe Malau’ulu started the fireworks with a first-inning grand slam and Candace Denis capped off the victory with a three-run shot to end the game in the fifth. Denis, who also had a sacrifice fly, finished with four RBI. Grace Fagan twirled a one-hit shutout for the Bulldogs. She struck out eight and walked two. Over the four games, Mississippi State led the tournament with a .343 batting average, seven doubles, and 26 RBI. Their pitching staff also had the lowest ERA at 0.52 with two shutouts, 36 punchouts and a .160 batting average against.

For all the results, box scores and other tournament information visit the Tournament Central.

Missouri capped off its 5-0 weekend with a 5-1 triumph over Louisville. Jazmyn Rollin and Kimberly Wert each recorded two hits for the Tigers, while Taylor Roby went yard for the Cardinals. Mizzou hit .321 with a tournament-best nine home runs and .575 slugging percentage.

Behind a two-hit shutout by Sydney Sickels, Illinois headed home undefeated, following a 2-0 win over No. 23 Auburn. She struck out seven and walked two batters. Kailee Powell and Shelby Stauffenberg each drove in a run for the Illini, who finished the weekend with a 1.25 ERA and a .200 batting average against.

No. 14 Kentucky blanked No. 8 Minnesota, 7-0 in its finale. Meghan Schoman and Grace Baalman combined on a four-hit shutout. Schoman earned the win, allowing all four hits with four strikeouts. Baalman closed out the final 2.2 innings with three punchouts. Tatum Spangler was 2-for-2 with a home run and three runs scored. Rylea Smith added two hits and Kayla Kowalik drove in two runs. UK’s staff posted a 0.72 ERA with 26 strikeouts and held their opposition to a .204 average. Offensively, they hit .305 with five home runs and a .524 slugging percentage.

Notre Dame, Missouri State and Liberty were also triumphant on Sunday with the latter two programs picking up their first wins of the season. The Bears blanked Baylor, 3-0, while Liberty edged No. 21 Ole Miss, 4-2. The Fighting Irish topped South Alabama 3-1, winning their final three contests to finish 3-2 overall.