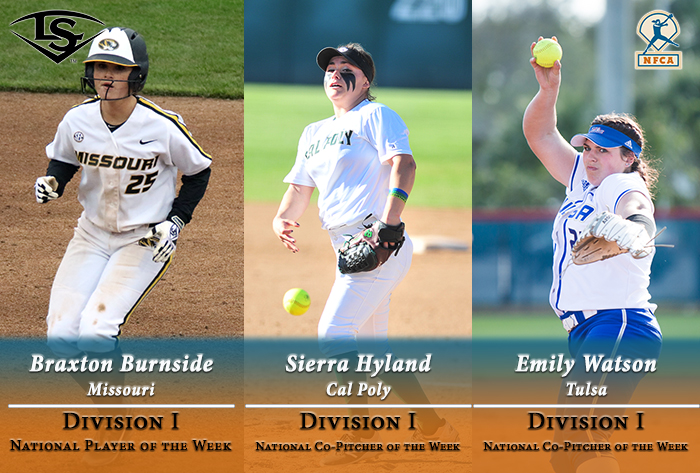 Burnside, a native of Paragould, Ark., enjoyed one of the best weeks in recent Mizzou Softball history, batting .545 (12-for-22) with three home runs and 18 RBI helping the Tigers to a 6-1 week. She highlighted her week with a program-record two grand slams and 10 RBI in a victory over North Dakota State. She matched the SEC record for RBI, while the program’s previous mark of nine RBI stood since 1993. Recording a hit in all seven games and an RBI in six, Burnside doubled, tripled, scored seven times and posted a 1.091 slugging percentage. The freshman shortstop was flawless in the field, racking up 15 putouts and 18 assists without committing an error.

“It’s an honor to receive this award,” said Burnside. “I want to give a big thank you to my teammates, because I couldn’t have done this without every one of them.”

Hyland was stellar in the circle last week picking up two complete-game wins over then-No. 9 Oklahoma and finishing the week 4-0 with a 0.95 ERA and 40 strikeouts to just two walks in 29.1 innings of work. The senior hurler held a high-powered Sooner offense to just one run in each start (3-1 wins), which included a one-hitter with nine strikeouts in the first outing. The following day, she scattered seven hits and struck out five. A native of Visalia, Calif, Hyland fanned 16 in a 2-1 eight-inning win over North Colorado and closed out the week with a combined 10 strikeouts in two appearance on Sunday to match the Big West Conference career strikeout record of 846. Earning Big West Pitcher of the Week honors, Hyland helped the 25th-ranked Mustangs move into the USA Today / NFCA Division I Top 25 Poll for the first time since 2009.

Highlighted by 24-inning stretch of scoreless softball and 42 strikeouts, Watson went 4-0 with a 0.56 ERA, keying Tulsa to four of its six wins, including victories over then-RV Arkansas and then-No. 13 LSU. She opened the week with three straight shutouts of the Razorbacks, Southeast Missouri State and the Tigers, before fanning a week-best 14 against Omaha. Watson tossed one-hit five and six-inning shutouts in her first two starts with eight and 12 strikeouts, respectively. Against LSU, the Edmond, Okla. native held the Tigers to five hits, while striking out eight and walking one in a 1-0 victory. In her final start of the week, she held the Mavericks scoreless through six innings before surrendering her first runs of the week in the seventh. The two runs snapped a 38-inning scoreless streak. Watson, who was tabbed American Athletic Conference Pitcher of the Week, held opponents to a .151 average and issued just two free passes in 25 innings of work.

“I’m honored to win this award and excited to see that all my hard work has been paying off,” Watson said. “I couldn’t do it without my team behind me, their defense has been making me feel confident to pound the zone. I’m just excited to get into conference play this weekend and we’re just looking at the ultimate award of winning conference and getting that postseason bid.”​