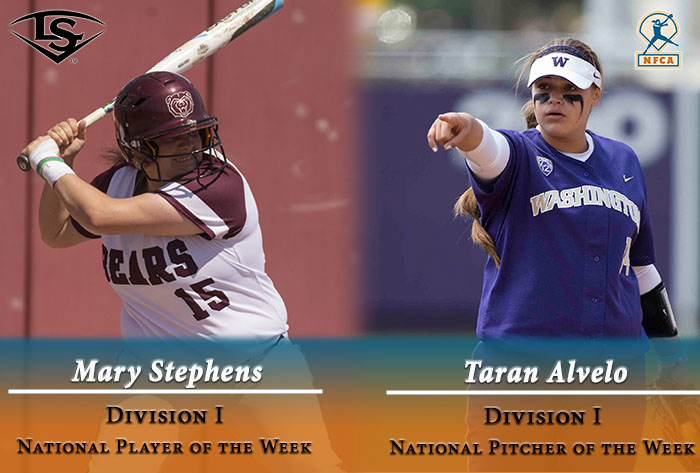 LOUISVILLE, Ky. – Missouri State slugger Mary Stephen and Washington hurler Taran Alvelo were named the Louisville/Slugger NFCA Division I National Player and Pitcher of the Week, respectively, for their play during the first week of the season on Tuesday afternoon.

Stephens clubbed three home runs, recorded four multiple-hit games and generated 11 RBI at the Louisiana Tech Invitational during the opening weekend for the Bears. In five games, she hit .692 with nine hits, two doubles and a 1.538 slugging percentage. She also drew three free passes which attributed to her .706 on-base percentage.

"It's an honor to win the award!," said Stephens. "I definitely couldn't have done it without my teammates getting their jobs done around me. I'm really excited to get back out there and compete with them this weekend."

She opened the season with two consecutive 2-for-2 outings, totaling seven RBI. The Sachse, Texas native blasted her first two home runs of the season in game two against Incarnate Word. She also homered against North Dakota, scoring two and knocking in a pair of runs.

Alvelo helped the eighth-ranked Huskies to a 3-1 showing at the Puerto Vallarta Softball Challenge in Mexico. Her dominance in the circle was showcased as she earned wins against preseason No. 1 Oklahoma and No. 2 Auburn, holding the two potent offenses to just one run over 17 innings. Against the Sooners, she twirled a complete-game shutout, surrendering five hits and striking out two in a 1-0 win.

“It was really great to start the season and face big teams like we did," Alvelo said. "We played strong as a unit. There were several times throughout the game when I could feel that we all had each other’s backs. It was really neat to see how we came together as offensive and defensive units to win the big games.”

In her first start of the season, she allowed a run on four hits with 13 strikeouts in a 2-1 10-inning complete game win against the Tigers. She also picked up a victory over Nebraska, surrendering two earned run on five hits with one punchout in six innings of work. For the weekend, the Carroll, Ohio native went 3-0 with a 0.91 ERA and 16 strikeouts in 21 innings of work.