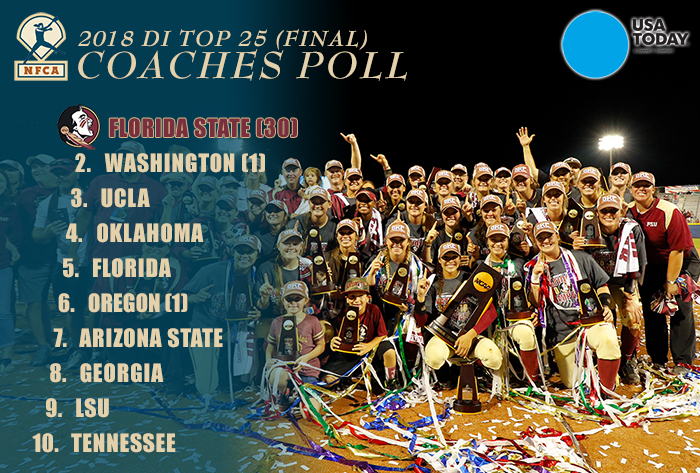 LOUISVILLE, Ky. –  Florida State, coming off its first NCAA national championship, ends the season No. 1 in the final 2018 USA Today/NFCA Division I Top 25 Coaches Poll. The Seminoles (58-12) won four elimination games and then swept Washington in the WCWS Championship Series to earn the 2018 crown.

FSU didn’t take the easy route, becoming just the third team in NCAA history to lose its first game and come back through the loser’s bracket to win the title. The Seminoles, who earned 30 first-place votes (797), had to win six straight postseason elimination games just to make it to the Championship Series. After sweeping through regionals, the Noles dropped game one of their Super Regional matchup against LSU before sweeping a day-two doubleheader to advance to their 10th Women’s College World Series.

As with super regionals, FSU dropped its first game, this time to UCLA. The Noles bounced back again. The Seminoles reeled off two wins on Saturday against Georgia and Oregon and two more in the semifinals on Sunday versus the Bruins. In the Championship Series, Florida State took the opener in a 1-0 nail-biter and closed it out by scoring eight unanswered runs in an 8-3 triumph.

National runner-up Washington came in at No. 2 and received one first-place vote (769). The Huskies (52-10) rolled into the Championship Series winning their first eight games of the postseason. After sweeping Alabama in the Super Regionals, Washington knocked off the two-time defending champs, Oklahoma, twice and No. 1 overall seed Oregon to play for its first title since winning it all in 2009.

Mississippi State, who made a run to the Tucson Regional final, rejoined the Top-25 at No. 23. James Madison, who was No. 23 at the end the regular season, dropped out.

The 2018 USA Today/NFCA Division I Top 25 Poll is voted on by 32 NCAA Division I head coaches, one representing each conference.

New to Poll: No. 23 Mississippi State

Dropped Out: No. 23 James Madison

The 2018 USA Today / NFCA Division I Top 25 Coaches Poll is voted on by 32 NCAA Division I head coaches with one representing each of the NCAA’s Division I Conferences.