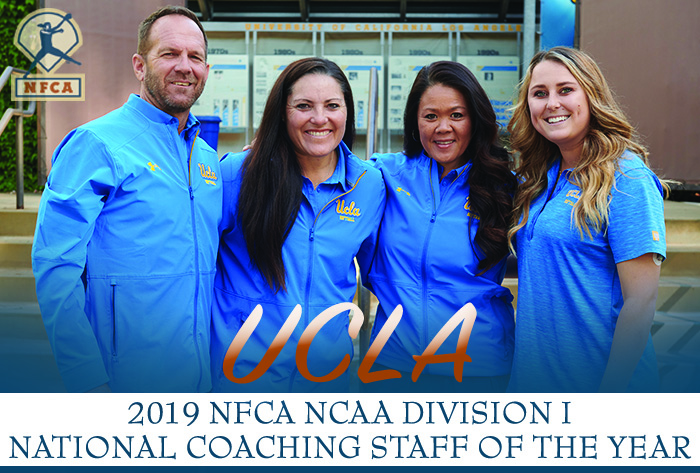 LOUISVILLE, Ky. – Following UCLA’s run to its 12th NCAA Division I national championship, head coach Kelly Inouye-Perez and her staff have been voted by their peers as the NFCA Division I National Coaching Staff of the Year, the Association announced Thursday afternoon.

The undefeated WCWS run culminated with a Championship Series sweep of No. 1 overall seed Oklahoma. The Bruins defeated No. 7 Minnesota, No. 6 Arizona  and No. 3 Washington before topping the Sooners by the scores of 16-3 and 5-4 with the title-clinching victory capped off by Kinsley Washington’s walk-off single in the bottom of the seventh. Washington’s single not only gave the Bruins their 12thchampionship, but Inouye-Perez her 600thcareer victory.

The 13-year head coaching veteran and 2019 Pac-12 Coaching of the Year has directed the UCLA program to a 600-172-1 record, five straight WCWS appearances, seven overall, two Pac-12 titles and a 66-25 postseason mark.