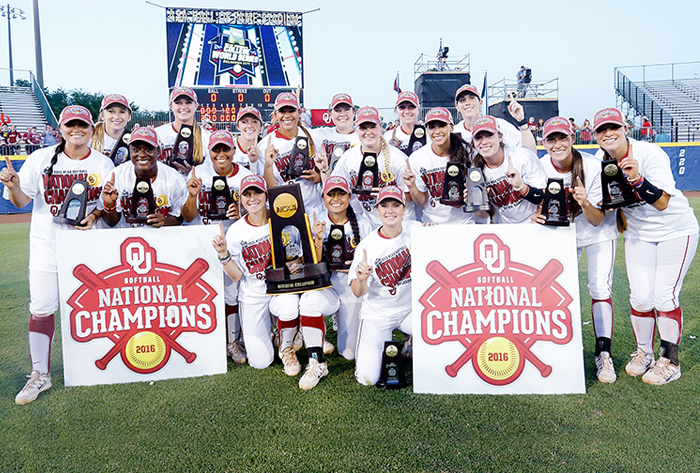 LOUISVILLE, Ky. – Completing a near perfect run to the program’s third national title at the Women’s College World Series, Oklahoma (57-8) is the unanimous No. 1 choice in the final USA Today/NFCA Division I Top 25 Coaches Poll.

The Sooners won 33 of their final 34 games, including a 10-1 postseason mark on their way to the NCAA Division I title, which concluded with a three-game championship series’ triumph over No. 2 Auburn. In a thrilling national title matchup, OU held on for two one-run victories in games one (3-2) and three (2-1). The Tigers (58-12), making their second straight WCWS appearance and posting a program-record 58 wins, rallied from a 7-0 deficit in game two and completed the comeback with a walk-off grand slam in the eighth inning.

National semifinalists LSU (52-18) and Florida State (55-10) bounced back from WCWS-opening losses to reach the semifinals. For the Tigers, it was their second straight trip to the semis after sweeping through regionals and rallying from an opening Super Regional loss at No. 11 James Madison (2-3) with 2-0 and 3-2 victories. The Seminoles rolled into to the WCWS with five straight victories and collected their first two WCWS wins since 2004.

After holding the No. 1 spot for 14 weeks, including the final six, Florida (56-7) fell from first to eighth after being swept by Georgia in the Gainesville Super Regional. Oregon (48-10) plummeted from fourth to 10th after dropping the final two games of its best-of-three series to UCLA in the Eugene Super Regional.

No. 16 Utah (36-21) made the biggest leap amongst all previously ranked programs. The Utes rose nine positions from 25th after making a Super Regional run, which included two victories over No. 18 Kentucky to win the Lexington Regional.

The USA Today/NFCA Division I Top 25 Poll is voted on by 32 NCAA Division I head coaches, one representing each conference. Final 2016 records are shown with first-votes in parentheses.