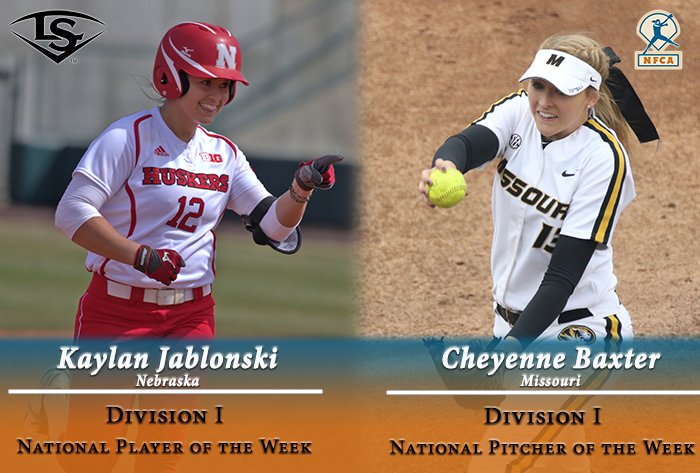 Jablonski played a key role in Nebraska’s road Big Ten road sweep of then-No. 22 Wisconsin. Excelling in the circle and at the plate, she went 3-0 with 2.45 ERA, while hitting .545 (6-for-11) with three doubles, a home run, four RBI and three runs scored. She surrendered seven runs over 20 innings to an offense that was ranked fourth in the NCAA in scoring (7.3 runs per game). Making three long relief appearances, Jablonski entered in the second inning of game one, allowing three runs over the final seven innings. The junior from Omaha, Neb. also went 3-for-3 at the plate with two RBI and was part of back-to-back home runs in the eighth inning of a 7-4 win. She went another seven innings in game two, while driving in two runs and finished the weekend with a six-inning outing and was 2-for-4 at the plate with a double and two runs scored.

“I am so honored and grateful to receive this award, and I would like to thank the NFCA for this honor,” said Jablonski. “I would also like to thank my coaches and teammates for the fight they had this weekend. Playing beside them and with them makes the game fun, and I am very thankful I get to battle with them every week.”

Baxter picked up both wins as Missouri earned its first-ever SEC series win against Alabama. She limited the Crimson Tide to an earned run over 13.1 innings, posting a 0.53 ERA with 12 K and a .191 batting average against. She opened the series with a complete-game shutout, scattering six hits, striking out five and walking two. In the series finale, she totaled 6.1 innings, allowing a run on three hits with seven strikeouts. After being pulled after 3.1 innings, Baxter re-entered with the game tied 3-3 and shut down Alabama over the final three innings setting up the walk-off win.

“My catcher, Kirsten Mack, and I have our own game plan that we try to execute each outing,” said Baxter. “We want to spin, locate and mix up each and every pitch. Receiving this honor feels like a team accomplishment. There were many great defensive plays and key offensive hits that led to my individual success and the team’s success over Alabama this past weekend.”